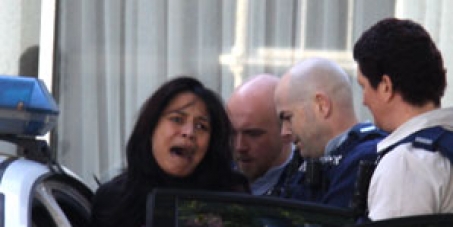 END UNLAWFUL incarceration of a mum of 6 children. Kiri campbell is at an undisclosed detention in a New Zealand jail.

By continuing you agree to receive Avaaz emails. Our Privacy Policy will protect your data and explains how it can be used. You can unsubscribe at any time. If you are under 13 years of age in the USA or under 16 in the rest of the world, please get consent from a parent or guardian before proceeding.
This petition has been created by Noel P. and may not represent the views of the Avaaz community.
x

Sign this petition
Noel P.
started this petition to
Commissioner of Police Peter Marshall MNZM. The Commissioner of New Zealand Police., John Key, Prime Minister of New Zealand., hawera.dc@justice.govt.nz newplymouth.dc@justice.govt.nz http://www.courtsofnz.govt.nz/contact-info, gg.govt.nz/‎ The Governor-General, Lt Gen Rt Hon Sir Jerry Mateparae
Dear Friends
.PLEASE READ THE APOSTOLIC LETTER (at the bottom of the page issued in the last week of July 2013) to allow prosecution of fraud by public officials, ISSUED by PONTIFF (POPE) FRANCIS
the current pope of the Catholic Church to come into LAW Sept 1st 2013.
Other LINKS are at the bottom of the page that will be updated as timer allows.

Kiri Campbell's photo is above & is CALLING OUT FOR "HELP PLEASE". . . July 31st 2013.
Last word out is that Kiri was arrested AGAIN. We need to send messages from all over the world to the dept’s I have listed below. This woman has done a courageous thing for us all.
If you believe a new & better world is ours for the CREATING then please SIGN THIS PETITION.
Much love Keri

To Whom It May Concern,
I would like to voice my concern & extreme objection to the matter of Kiri Campbell & her treatment. Do not for one minute think this is a small matter as the eyes of the world are on you now. Too many of us are now aware of the reality of our situation here on Earth. If you are not yet awake to this then please inform yourself further by researching the following links & reading the information. We WILL NOT be moved, please join us in making a better world for us all.
Kind Regards
Keri Schwed

Below find the details of the foreclosure of your corporate justice system;

The One People’s Public Trust (OPPT) announced the foreclosure of the world’s banks and “governments” on December 25th 2012 stemming from prior investigation into massive fraud across the entire system: http:// http://www.scribd.com/doc/118067922/PARADIGM-DOCUMENT-FROM-THE-TREASURY-FINANCE-AG- INDUSTRIESTRASSE-21-CH-6055ALPNACH-DORF-SWITZERLAND.

What happened? The OPPT posed to the world’s Banks and Governments: 1. that they had by deceptive acts and practices been stealing from the people for hundreds of years, and; 2. nothing stood between the Creator and each of the Creator’s creations, and gave due opportunity to rebut both statements. They could not and did not. To understand this fully please read the Declaration of Facts at http://www.peoplestrust1776.org/ > UCC Filings > 2012 ptII > Declaration of Facts. Here are two excerpts:
Government Charters Cancelled: (Refer: DECLARATION OF FACTS: UCC Doc # 2012127914 Nov 28 2012) “…That any and all CHARTERS, inclusive of The United States Federal Government, UNITED STATES, “STATE of …”,

Volunteers within the military … “to arrest and take into custody any and all certain states of body, their agents, ofﬁcers, and other actors, regardless of domicil by choice, owning, operating, aiding and abetting private money systems, issuing, collection, legal enforcement systems, operating SLAVERY SYSTEMS against the several states citizens, …”, and “Repossess all private money systems, tracking, transferring, issuing, collection, legal enforcement systems operating SLAVERY SYSTEMS…” “…all beings of the creator shall forthwith assist all Public Servants identified herein, to implement, protect, preserve and complete this ORDER by all means of the creator and created as stated herein, by, with, and under your full personal liability…” Search document numbers listed at the Washington DC UCC Registry: https://gov.propertyinfo.com/DC-Washington/

What does this mean to you? Are you paying a “debt” to a foreclosed entity..? e.g. mortgage, credit card, car loan?
OPPT has foreclosed on hierarchy. No one stands between you and your creator… not even “Government”.
Because a CEASE AND DESIST order exists, you are free to offer terms and conditions to individuals acting on behalf of a foreclosed Bank or “Government”, by issuing a Courtesy Notice.

What does this mean to Banks & “Governments”? All beings now act in the capacity of individual entities without a corporate safety net and with full personal liability for each and EVERY ACTION THEY TAKE under common law, protected and preserved by public policy UCC 1-103, and Universal law, the governing law laid out in the OPPT UCC filings. (Refer: WA DC UCC Ref Doc # 2012113593)

Should any individual pursue any actions on behalf of a foreclosed Bank or “Government”, causing another individual any damage as herein described, they in their individual and unlimited capacity are absolutely liable. Such actions may result in the receipt of a Courtesy Notice.

Whereas Banks and “Governments” have been foreclosed worldwide… Acts, Statutes, Codes, Courts, Executive Orders etc were thereby foreclosed, thus without a lawfully binding contract – individual to individual, no instrument exists to compel performance.

The Courtesy Notice offers new terms to any individual of a foreclosed entity for their acceptance and the method of acceptance is clearly defined.

Individuals are now downloading and sending Courtesy Notices worldwide; 64,000 were downloaded in the first two days following release in early Feb 2013. See http://www.oppt-in.com
What is the UCC – Where and to whom does it apply? The Uniform Commercial Code (UCC) is the ‘bible’ of commerce and used world wide, but sometimes in disguise. UCC is not taught in law schools; it is used in high level banking and government corporations.

Accordingly most lawyers, attorneys and magistrates know nothing about UCC and will argue it has no application. 1. Executive Order 13037 dated 04 Mar 1997 defined humans as capital. See: http:// americankabuki.blogspot.com.au/2013/03/us-citizens-defined-as-property-of.html 2. UCC Doc # 0000000181425776 filed 12 Aug 2011 evidences sale of US citizens in transaction between The Federal Reserve System and The United States Department of the Treasury 1789 for $14.3 trillion. (Linked above) 3. UCC Doc #2001059388 evidences the template the Federal Reserve Bank of New York uses to secure the collateral in major banks around the world… including chattel paper, goods and the unborn young of animals. See http://www.mediafire.com/view/?3yh79cjnzcwzu0s

Those who would regard the UCC as irrelevant outside the US are thereby claiming former funding arrangements with the Federal Reserve Bank of New York null and void.

Due Diligence Given the usage of UCC filings in the upper levels of “government” and banks worldwide, due diligence is a necessity.

If there is a dispute, error, or falsity make AND deliver a duly verified sworn DECLARATION OF REBUTTAL to the duly verified, sworn and REGISTERED OPPT DECLARATION OF FACTS, point by point, with specificity and particularity, with full responsibility and liability, under the penalty of perjury under any law you identify, that the forgoing is true and accurate, signed by your wet-ink signature.

To date, no such rebuttal has been registered.
Further Research Radio shows:

All People Declared Free of Debt (Refer Notice of Declaration of Absolute Truth UCC# 2013032035) The final filing of the OPPT occurred on March 18, 2013. This document terminated all remaining man-made entities and returned all people of this planet to absolute freedom. In this document the creator is referred to as “absolute essence” and all creations people are referred to as “absolute essence embodied”.

Article VI states…”I duly verify, with full responsibility and liability, by DECLARATION OF ORDER, that eternal essence IS made transparent and known by the DO’ing of any and all embodiment of eternal essence in eternal essence’s universe, IS free and free of debt, unrebutted.”

This means THERE IS NO DEBT.

You have no debt… No one has debt… it is done.

OF THE SUPREME PONTIFF
FRANCIS

In our times, the common good is increasingly threatened by transnational organized crime, the improper use of the markets and of the economy, as well as by terrorism.

It is therefore necessary for the international community to adopt adequate legal instruments to prevent and counter criminal activities, by promoting international judicial cooperation on criminal matters.

In ratifying numerous international conventions in these areas, and acting also on behalf of Vatican City State, the Holy See has constantly maintained that such agreements are effective means to prevent criminal activities that threaten human dignity, the common good and peace.

With a view to renewing the Apostolic See’s commitment to cooperate to these ends, by means of this Apostolic Letter issued Motu Proprio, I establish that:

a) crimes committed against the security, the fundamental interests or the patrimony of the Holy See;

b) crimes referred to:

– in Vatican City State Law No. IX, of 11 July 2013, containing Amendments to the Criminal Code and the Criminal Procedure Code;

when such crimes are committed by the persons referred to in paragraph 3 below, in the exercise of their functions;

c) any other crime whose prosecution is required by an international agreement ratified by the Holy See, if the perpetrator is physically present in the territory of Vatican City State and has not been extradited.

2. The crimes referred to in paragraph 1 are to be judged pursuant to the criminal law in force in Vatican City State at the time of their commission, without prejudice to the general principles of the legal system on the temporal application of criminal laws.

3. For the purposes of Vatican criminal law, the following persons are deemed “public officials”:

a) members, officials and personnel of the various organs of the Roman Curia and of the Institutions connected to it.

b) papal legates and diplomatic personnel of the Holy See.

c) those persons who serve as representatives, managers or directors, as well as persons who even de facto manage or exercise control over the entities directly dependent on the Holy See and listed in the registry of canonical juridical persons kept by the Governorate of Vatican City State;

d) any other person holding an administrative or judicial mandate in the Holy See, permanent or temporary, paid or unpaid, irrespective of that person’s seniority.

4. The jurisdiction referred to in paragraph 1 comprises also the administrative liability of juridical persons arising from crimes, as regulated by Vatican City State laws.

5. When the same matters are prosecuted in other States, the provisions in force in Vatican City State on concurrent jurisdiction shall apply.

6. The content of article 23 of Law No. CXIX of 21 November 1987, which approves the Judicial Order of Vatican City State remains in force.

This I decide and establish, anything to the contrary notwithstanding.

I establish that this Apostolic Letter issued Motu Proprio will be promulgated by its publication in L’Osservatore Romano, entering into force on 1 September 2013.

Given in Rome, at the Apostolic Palace, on 11 July 2013, the first of my Pontificate.

KIRI LINKS:
https://www.facebook.com/K1r1Campb3ll?fref=ts
WHAT TO DO FOR KIRI:
http://blog.headhelp.me/2013/07/kiri-campbell-calling-out-for-help.html
~ look at this and send

LINKS to OPT & OPPT:
~educate yourself here on background to this WORLD-WIDE event.

Today: Noel P. is counting on you

Noel P. needs your help with "END UNLAWFUL incarceration of a mum of 6 children. Kiri campbell is at an undisclosed detention in a New Zealand jail.". Join Noel P. and 780 supporters today