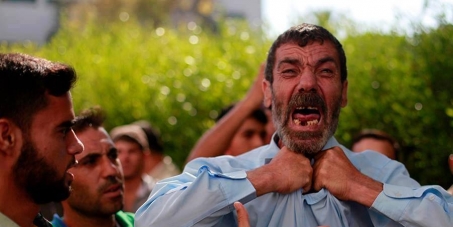 By continuing you agree to receive Avaaz emails. Our Privacy Policy will protect your data and explains how it can be used. You can unsubscribe at any time.
This petition has been created by Nurit P. and may not represent the views of the Avaaz community.

I am writing to you from the mouth of hell. Genocide in Gaza, pogroms and massacres in the West Bank and shell-panic in Israel.Three Israeli settlers kidnapped and killed, and the police that was notified on the spot did nothing. Their death was used as a pretext to carry out the per-palnned onslaught on the West bank and Gaza. A Palestinian boy from Jerusalem kidnapped and burned alive and the police, notified immediately, does nothing. More than 200 victims in the raid on Gaza. Whole families murdered by Israeli pilots, and as a result - rocket shelling all over Israel. Dangerous and violent racism against Arab Israeli citizens, encouraged enthusiastically by Israeli Ministers and Parliament members, leads to riots in the streets, breeds aggression and severe discrimination against Palestinians, along with a newly erupted violence against Jewish peace activists.

Despite agreements, international resolutions and Israeli promises, the settlements are expanding - while Palestinian homes in East Jerusalem and the West Bank are constantly destroyed. Water flows in the swimming pools of the settlements without limitation, while Palestinian children are thirsty and whole villages and cities live under a cruel water regime, as was recently pointed out by President Schultz. Roads for Jews only and countless checkpoints make Palestinian life and movement impossible. The undemocratic character of the state of Israel is increasingly transforming it into a dangerous apartheid state.

All these atrocities were conceived by the same devilish and criminal mind – the mind of the racist, ruthless occupier of Palestine. Therefore the blame for all these crimes against humanity should be placed where it belongs: on the bloody hands of the Israeli racist rulers.Israeli politicians and generals, soldiers and pilots, street hudlums and members of the Knesset are all guilty of the bloodshed and should be brought to trial before the international Criminal court of justice.

To this day, the international community has not done enough to stop Israeli regime of occupation. European countries have profoundly criticized it while at the same time continuing to cooperate fully with Israel, economically, politically and militarily. As a result, Israel does not pay any price for seriously violating international law and human values. On the contrary, Europe also pays for much of the humanitarian damage of the occupation, making it even easier for Israel to maintain it.

Although guidelines were issued prohibiting EU institutions to fund or to finance research organizations and activities in the settlements and 20 European countries have published formal warnings to their citizens and companies regarding trade and financial relations with the settlements, this is not enough. These measures do not seriously challenge Israeli policy in occupied Palestine. Europe could do much better as illustrated by its harsh response to Russia's annexation of Crimea. In a few weeks - not years - the European Union imposed targeted sanctions on Russian and Ukrainian officials and on business firms operating in Crimea. The EU went even further and expanded sanctions by banning the import of Crimean goods.

We, the citizens of Israel and the stateless people of Palestine, cannot bring about the end of the occupation or stop the bloodbath by ourselves. We need the help of the international community at large and of the EU in particular. We need you to prosecute the Israeli government and army, we need you to boycott Israeli economy and culture, we need you to urge your government to stop profiting from the occupation and we need you to call for an embargo of arms on Israel and lift the siege over Gaza. Israel is the biggest and most dangerous terrorist organization existing today. All its ammunition is used to kill innocent civilians, women and children. This is nothing less than genocide.

As a laureate of the European Parliament’s Sakharov Prize for Human Rights, and as a mother and a human being, I call on the EU to use all the diplomatic and economic tools at its disposal to help save my country from this abyss of death and despair in which we live.

Please ban Israel form the international community until it becomes a real democratic state, Boycott and sanction whoever makes business with this apartheid state and help us get rid of this bloodthirsty racist government and restore life to Palestinians and Jews alike.
Report this as inappropriate
There was an error when submitting your files and/or report.
Inaccurate Inappropriate language Hate speech Illegal Commercial/spam Offensive
×

Today: Nurit P. is counting on you