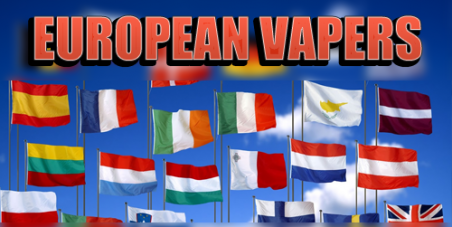 Ecigs to be General Use products in Europe.

By continuing you agree to receive Avaaz emails. Our Privacy Policy will protect your data and explains how it can be used. You can unsubscribe at any time. If you are under 13 years of age in the USA or under 16 in the rest of the world, please get consent from a parent or guardian before proceeding.
This petition has been created by Panos P. and may not represent the views of the Avaaz community.
x

Sign this petition
Panos P.
started this petition to
European Parliament
I am a vaper from Greece. Since 19th of December 2012, when European Commision announced the "Proposal to revise Tobacco Products Directive", there is a big problem in my mind. According to this proposal, all eliquids having nicotine concentration above 4mg/ml will be regulated as drugs and they will need licensing from National Drug Organization (local FDA). I vape eliquids (as most vapers) having nicotine concentration of 18mg/ml.

If this happens, many problems will present:

1) For 18-24 months (time needed for licensing) I am forced to return to tobacco cigarettes which are carcinogenic. So, my health will be damaged just because European Parliament decided to regulate eliquids as drugs. At the same time, tobacco cigarettes are totally free to be sold everywhere.

2) Now, eliquids are safe for home use as they all have childproof caps and necessary R-S phrases-images according to 1272/2008 EC as chemicals (General Use products). If they are regulated as drugs there is no such standard, so the kids in home would be exposed to danger of poisoning.

3) The other option left except tobacco cigarettes is NRT gums and stickers. These drugs have very serious side-effects. And all of them are used to quit nicotine and they do not cover your needs in nicotine.

Dozens of studies have proved that ecigs have not remarkable effects on lungs (FAME LAB's study, 2012), on heart (Dr.Farsalinos' study, 2012) etc. Many public researches have been announced proving that at least 50% of vapers have totally quit smoking and almost 80% of vapers had essential reduction of tobacco smoking (more than 70%).

As citizen of EU, I have the freedom of choice. I want to choose the way for taking the nicotine I am addicted to. Noone must be able to force me to start tobacco smoking again after 20 months, when I have seen my body to recover after 18 years of tobacco smoking. Who takes the responsibility if I have health problems returning to tobacco smoking? Every vaper has the right to vape in a democratic European Union.

Today: Panos P. is counting on you

Panos P. needs your help with "Ecigs to be General Use products in Europe.". Join Panos P. and 2,867 supporters today