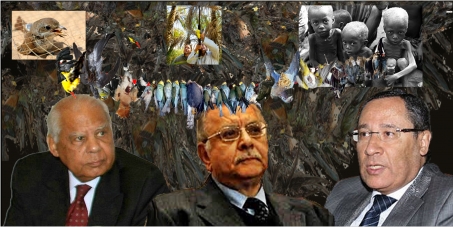 By continuing you agree to receive Avaaz emails. Our Privacy Policy will protect your data and explains how it can be used. You can unsubscribe at any time. If you are under 13 years of age in the USA or under 16 in the rest of the world, please get consent from a parent or guardian before proceeding.
This petition has been created by Golden O. and may not represent the views of the Avaaz community.
x

View this National Geographic article to get a sense of the slaughter.

As I write this, migration of land birds is at its height in Egypt and the Mediterranean. In a recent publication, Birdlife International stated that in the 2012 season a mind-bending 140 MILLION migrant birds were slaughtered for sale as restaurant delicacies in the region, after a dedicated team of researchers and volunteers reported on the annual murder of these hapless migrants. The number currently being killed in 2013 is possibly less, as there are fewer birds after the 2012 annihilation, but possibly more because the people responsible can easily obtain inexpensive, effective and copious mist-nets from China. (Note: some Chinese companies will not accept orders of less than one ton of netting at a time!).

Having crossed the Mediterranean, when migrant birds land along the 700-kilometre coastline of Egypt they are exhausted after their journey and eager to find food and rest. What awaits them is 700-kilometres of mist-nets strung along the entire length of the coast, and thousands of local people eager to literally ‘squeeze’ the life out of every single one of them by crushing their heads with their hands.

What these Egyptians are doing, apart from depriving people who used to enjoy the presence of these birds in their breeding territories across Europe and Russia, is removing a very integral cog in the organisation of ecosystems and the slightest shift in the natural balance will lead to a domino effect as every facet of natural order is compromised. Technically, this is known as a negative feedback mechanism that leads to a rapid degradation of ecosystems.

These birds are insectivores, meaning that they feed on insects, and as they continue across the perilous Sahara Desert they may drop into oases in search of water, food and refuge. But even here, people with shotguns cheerfully shoot every single bird they see, as much as for ‘sport’ as for the table.

In the recent past when Egypt did not have such a large population, eastern Europe and Russia had large areas of undisturbed habitat, and before China was an avid exporter of bird-destroying nets, vast numbers of the migrant birds flew into sub-Saharan Africa, spreading out over the entire East African region where many spent their northern Winter before returning again northwards in the Spring. A large number of birds headed further south to occupy more territory, some as far as the Cape Province in South Africa.

Whilst present in the region, these consumers of insect pests serviced the agricultural lands and gardens, removing troublesome insects and providing a natural control for both farmers and ecosystems. A recent study by the University of Nairobi, carried out by Paul Kariuki Ndang’ang’a and colleagues, involved netting off a portion of a vegetable plot (Brassica) and a control area of un-netted vegetables. Insects could pass through the mesh unhindered but birds were not able to enter. After measuring the volume of leaf pests on both areas, the netted plants showed 30% more infestation and damage than the control plants which insectivorous birds had access to. This science confirmed the long-held belief that the presence of the birds had a major beneficial impact on the amount of food generated from this small study area and, by extrapolating this 30% figure over a vast area of cultivation, the difference that birds make to African food production is simply staggering.

Now that the Egyptians are taking these benevolent birds out of the chain, FOOD PRODUCTION IS GOING TO FALL. The reduced volume of comestibles reaching market WILL RESULT IN AN ESCALATION OF FOOD COSTS for families living in countries like Kenya and Tanzania, further resulting in LESS INCOME TO FEED THEIR FAMILIES. With natural pest control removed by the Egyptians, farmers will be forced to resort to other methods that are far more harmful to humans and wildlife. An increase in chemical poisons (pesticides) will be spread over the land and, in doing so, will destroy all insects (good and bad) that come into contact with them. These toxins will eventually leach out of the fields and enter the water tables, wreaking more havoc for rural people. The consumer will, once again, bear another increase in cost of food to subsidise using these poisons. Much of the land in tropical sub-Saharan Africa is marginal, in that the climate and geology is not conducive for successful agriculture to begin with. The many people that live in these regions at present do manage to subsist but by removing the natural pest control service provided by the migrant birds, they will lose their very means of existence and vast regions will become uninhabitable. Cue FAMINE.

With the overall loss and reduction in food productivity, more wilderness areas will have to be turned over to agriculture, in order to produce enough to feed the region’s ever-growing population, and this will put further pressure on existing natural habitats, resulting in a chain of events that will surely lead to the eventual disappearance of Africa’s iconic wildlife.

On another sinister note, also bear in mind that not all insects are crop pests; many others are notorious vectors of human and domestic animal diseases. Birds are the natural predators of these insects, without the birds the insects will multiply, spreading diseases far and wide. Malaria will become the scourge it was in the past, Dengue and Encephalitis will be out of control, and Governments in the region will not have the resources to prevent their citizens from being decimated. By this point, the pointless actions of the Egyptian bird killers will have put the nail firmly in the coffin of many African nations.

When Mohammed Morsi, the former Egyptian President, learnt of proposals to build hydro-electric dams along the upper reaches of the Nile system, he said “HE WOULD HAVE NO HESITATION IN DECLARING WAR WITH EAST AFRICAN NATIONS”. He was naturally concerned about the severe and harmful impacts of changes in water flow upon his beloved Egypt. And yet, the Egyptian Government feel it is quite in order to eradicate all of the migrant insect eaters that have been providing a natural service to African farmers since long before the first Egyptian ate his first bird. What right do they have to continue to slaughter our birds? What right do they have to ruin the health, economy, landscape and people of sub-Saharan Africa?
They have no right whatsoever and the slaughter of millions of migrant birds must be stopped IMMEDIATELY.

None of the recipients of the petition are cited individually as being responsible for the devastation of the migrant birds, or the resultant ecological disasters, but they can all influence change in a major way. We implore them all to take serious and positive action in this regard.

We have dubbed this petition B MAD which is an acronym for Bird Migration Appreciation Day, and having read of the impending atrocities, we hope that YOU will B MAD enough to want to voice your opinion.

Please spare a few more moments to ram home the message with a few words in the comments area. Knowing what you know now, would you ever visit a country that commits these atrocities, and has a government totally indifferent to what is taking place, or not caring about any affect it is having on the wellbeing of other nations.

Whilst this appeal arises from very concerned Kenyans and Kenyaphiles, we call on our fellow African brothers and sisters to demand action from their own governments, and demand what actions they are undertaking to protect them and stop the impending disasters.


Should you wish to contribute a little further, placing this article on your Facebook and Twitter accounts will exponentially assist in spreading the word further, and showing a stronger solidarity towards ending the current and impending horrors.

And, if you can add details of this petition to your blog, website, any social media platform that you use, that would be really great! Further still, if you like to post images on web forums, such as birdforum, surfbirds, birdguides (among many others), then please also provide the link to this petition. These migrant birds need all the support that we can muster for them. Let's get this message out to the world ASAP and hope that they have a chance!

Today: Golden O. is counting on you