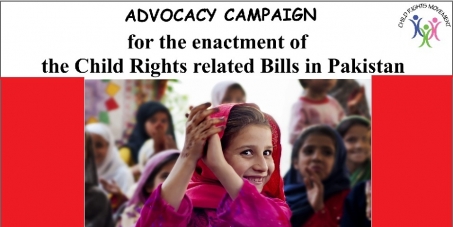 By continuing you agree to receive Avaaz emails. Our Privacy Policy will protect your data and explains how it can be used. You can unsubscribe at any time.
This petition has been created by ChildRights M. and may not represent the views of the Avaaz community.

Sign this petition
ChildRights M.
started this petition to
The Prime Minister of Pakistan
The Child Right Movement (CRM)- a coalition of more than 100 civil society organizations working for the protection and promotion of child rights across Pakistan- realizes that legislation on child rights issues gained little attention of the parliament at the federal level despite several commitments at the national and international level by the consecutive governments. The UN Committee on the Rights of the Child while considering Pakistan’s Periodic Reports in 2003 and 2009 repeatedly raised its concerns and recommended to enact pending legislation related to child right with no results so far.

In Pakistan, over the years legislation on child rights issues has not received due consideration and commitment by the policy makers and one of the biggest reasons for this disparity is the absence of National Commission on the Rights of Children (NCRC) to act as a central, independent and effective child rights body to ensure monitoring and implementation of the minimum child rights standards across the country; to respond to the child rights violation cases effectively in a timely manner; and to exercise pressure for filling legislative gaps. The Bill on the NCRC has been pending since 2001.

The CRM Pakistan is concerned that there are more than 20.5 million children out of school and of these 10.2 million are engaged in child labour where they are exploited, abused, tortured and killed. The Global Slavery Index 2013 reveals millions of modern slave children in Pakistan. Unfortunately, crimes against children are increasing rapidly. In 2009, 2010, 2011 and 2012, the reported cases of child sexual abuse were 2012, 2595, 2303 and 2788 respectively.

Despite the fact that 2013 was declared as “The Year of the Rights of the Child” by the then Prime Minister on Universal Children’s Day, 20th November 2012 no significant steps have been taken during the year for the promotion and protection of child rights at the policy and legislation level.

Looking at the deteriorating state of child rights in the country, the CRM Pakistan has decided to launch a campaign for the enactment of pending legislation related to child rights at the federal level and create awareness about the situation of child rights.
Report this as inappropriate
There was an error when submitting your files and/or report.
Inaccurate Inappropriate language Hate speech Illegal Commercial/spam Offensive
×

Today: ChildRights M. is counting on you