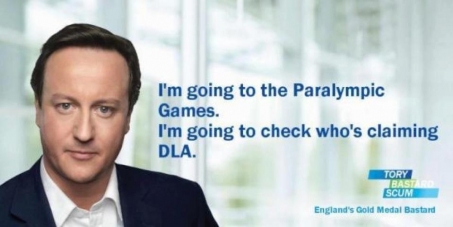 This petition is closed
50 Supporters
Stephen B.
started this petition to
Anyone with a personal interest who has been victimised by DWP/Atos
Because The 'Evil Regime' of UK P.M. David Cameron, and Ian Duncan-Smith & Chris Grayling and the DWP & ATOS are ruining the lives of hundreds of thousands of sick, vulnerable and disabled people in the UK caused by flawed ATOS assessments which the British Medical Association recently declared are 'unfit for purpose' causing the loss of benefit entitlements needed to survive.

The sick, vulnerable and disabled are regularly vilified in the Tory Right Wing Press such as The Daily Express and The Daily Mail as being 'Benefit Cheats & Scroungers' DESPITE professional evidence to the contrary from the patients OWN Doctors and Consultants, and that has resulted in a massive increase in Abuse and Disability Hate Crimes and many suicides are as result of this vilification. See http://calumslist.org/ The number of recorded incidents of disability hate crime in England and Wales rose in 2011 to almost 2,000, its highest total since records began. In the same year there were just 523 convictions for the offense. There were 1,942 recorded incidents of disability hate crime in England and Wales in 2011, an increase of more than 25% on the total for 2010 and the highest since this data was first recorded in April 2010. Data obtained under the Freedom of Information Act shows the number of recorded incidents grew by 60% between 2009 and 2011. Please remember to share this WIDELY and ask your friends to SHARE also. Thanks Stephen B

Today: Stephen B. is counting on you