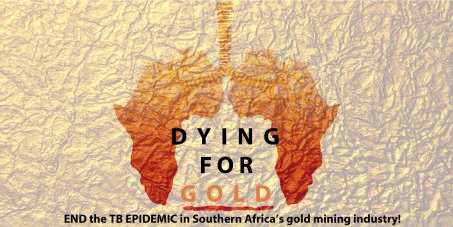 By continuing you agree to receive Avaaz emails. Our Privacy Policy will protect your data and explains how it can be used. You can unsubscribe at any time. If you are under 13 years of age in the USA or under 16 in the rest of the world, please get consent from a parent or guardian before proceeding.
This petition has been created by Saoirse F. and may not represent the views of the Avaaz community.
x

Sign this petition
Saoirse F.
started this petition to
Anglo Gold Ashanti
Every 15 seconds someone dies from Tuberculosis. The epicentre of the epidemic is within the gold mining industry of Southern Africa where rates of infection are 28 times a declared public health emergency by the WHO. In many cases, mine workers who contract TB are sent back to their communities with no continuation of care or means for treatment and will on average infect between 10-15 people per year. As a result, the World Bank estimates that mining activities are responsible for around 760,000 new cases of TB each year.

Despite having solid policies for tackling occupational health problems, mining companies like Anglo Gold Ashanti have been accused of operating with ‘a pervasive culture of non-compliance to legislative requirements’ according to the South African Department of Minerals and Energy. This negligence is playing a major role in driving the TB epidemic.

Using the World Health Organisation’s suggested best practice for tackling TB in mining, we are calling on AGA to implement a ‘three point plan’ for tackling the disease.

Prevent workers from developing diseases and living in conditions that compromise their immune systems predisposing them to TB by; reducing rates of silicosis through decreasing silica dust levels; improving treatment and support for HIV sufferers and converting single-sex hostels into family units as a way of managing sex worker activity and HIV transmission.

Find and track workers by establishing a bio-metric database that records their TB/HIV status allowing for the improved targeting of treatment and compensation; invest in new diagnostic tools -and the agencies that can deploy them- to help actively detect cases of TB.


Treat workers with TB better by improving the monitoring and support for TB patients taking medication based on the World Health Organisation’s Directly Observed Treatment Short-course (DOTS) best practices; for the South African health system and mining companies to collaborate on improving referral systems to local clinics in rural areas and mobilising resources to treat TB.

Sign the petition now and get Anglo Gold Ashanti to play its part in stopping the TB epidemic in the gold mining industry of Southern Africa.

Today: Saoirse F. is counting on you