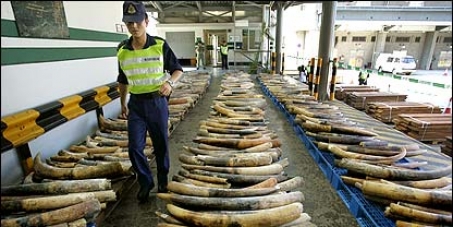 By continuing you agree to receive Avaaz emails. Our Privacy Policy will protect your data and explains how it can be used. You can unsubscribe at any time. If you are under 13 years of age in the USA or under 16 in the rest of the world, please get consent from a parent or guardian before proceeding.
This petition has been created by Avaaz L. and may not represent the views of the Avaaz community.
x

Sign this petition
Avaaz L.
started this petition to
Pope Benedict XVI
Last week news broke that a prominent Catholic leader advised an undercover journalist how to smuggle elephant ivory! The story lifted the veil on the powerful role of religion in fueling the slaughter of elephants to make ornaments. But we can push the Vatican to drop the demand and help stop blood ivory .

Thousands of elephants are killed each year so that their tusks can be carved into religious objects. In the Philippines ivory figurines of Catholic saints are so popular that the word for ivory also means ‘religious statue’. The Vatican has so far refused to take firm action, but if the Pope calls on all Catholics to stop buying and selling ivory figurines -- he could help stop the slaughter.

Let’s call on the Pope to follow the legacy of St. Francis, the Catholic patron saint of animals, and lead his congregation to stop fueling the cruel blood ivory trade. Click on the right to add your name to the petition -- if we reach 100,000 names, Avaaz will light one candle for every elephant murdered last year in front of St. Peter’s cathedral in the Vatican:

Today: Avaaz L. is counting on you