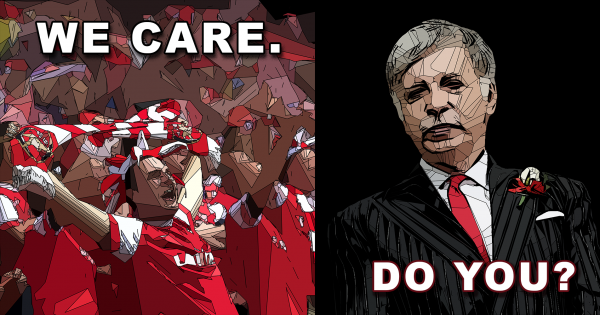 By continuing you agree to receive Avaaz emails. Our Privacy Policy will protect your data and explains how it can be used. You can unsubscribe at any time. If you are under 13 years of age in the USA or under 16 in the rest of the world, please get consent from a parent or guardian before proceeding.
This petition has been created by Arsenal S. and may not represent the views of the Avaaz community.
x

As Arsenal fans we have watched with frustration as the team’s football performances have declined over the past decade. When Stan Kroenke began buying Arsenal shares the club had just competed in a first Champions League final. Twelve years on, Arsenal are about to play in the Europa League for the third year running.

Off the pitch, fans have never felt more marginalised, less listened to or valued. This was sadly illustrated when Stan Kroenke forcibly bought out the last remaining supporter-shareholders without even a word of appreciation for their custodianship role in the club.

It feels as though Arsenal is at a crossroads. Things need to change .

What all of us as signatories to this statement want to see is meaningful action by Stan Kroenke to reinvigorate our football club.

This requires work to strengthen the club’s board and football executive and to once again make Arsenal a place where fans have a real sense of belonging.

‘KSE’s ambitions for the club are to see it competing consistently to win the Premier League and the Champions League.’

We see little evidence of how this is to be achieved. Instead our club feels like an investment vehicle, personified by the owner's statement that he didn't buy Arsenal to win trophies .

It is sad that an institution like Arsenal FC has such passive ownership. All of us want to see a clear sense of purpose and direction. KSE should start by being more open and accountable and explain how they intend to achieve the goal of winning the game’s major trophies.

If Stan Kroenke is going to be absent from London he needs to make sure the board he delegates to is fit for purpose. There is a desperate need for some new and dynamic appointments. The addition of independently-ˇminded directors can act as a genuine check and balance on the owner. Ideal candidates would have football and commercial expertise relevant to the needs of a football club in 2019, and ideally some ‘Arsenal DNA’.

Arsenal have invested money in recent years, but their approach to both buying players and paying wages looks uncoordinated and appears to lack strategy. There has also been a lot of turnover in the senior football personnel. A strong board would be proactively managing this.

On a matchday the Emirates Stadium can be a soulless place. The atmosphere is poor and there are thousands of empty seats blighting almost every game. If Arsenal really cared they would make sure seats weren’t left empty by investing in an improved ticketing system and actively supporting initiatives like safe standing. The club uses the strapline ‘Always ahead of the game’. It would be good to see action to demonstrate this.

Finally, the very fabric of football in England and across Europe is at threat from proposals for a European Super League.

These moves are driven by the greed of a few so-ˇcalled elite clubs who want guaranteed entry into top-ˇlevel European competition every year. Why care if you finish fifth or lower if automatic qualification is guaranteed? Arsenal and the other clubs involved should understand that fans do not want more meaningless group stage fixtures designed only to rake in more broadcast and ticketing revenue. You could call it the ‘franchisation’ of European Football. Arsenal should immediately clarify they will have no part in this.

As Arsenal Supporters, we care deeply. We would like to hear from our club and see actions that demonstrate that they do too. The first opportunity comes when the Managing Director and Head of Football speak to invited supporters on July 25th. We urge them to address the issues raised here. We will watch with interest.

Today: Arsenal S. is counting on you