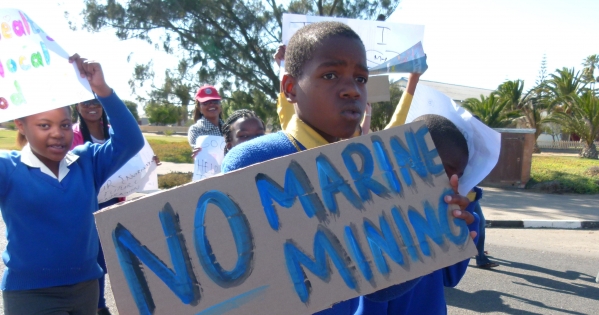 By continuing you agree to receive Avaaz emails. Our Privacy Policy will protect your data and explains how it can be used. You can unsubscribe at any time. If you are under 13 years of age in the USA or under 16 in the rest of the world, please get consent from a parent or guardian before proceeding.
This petition has been created by Marcia F. and may not represent the views of the Avaaz community.
x

Sign this petition
Marcia F.
started this petition to
Minister of Environment and Tourism Pohamba Shifeta, Minister of Fisheries and Marine Resources Bernhardt Esau, Ombudsman Adv. John Walters, Office of the Environmental Commissioner
Please help stop marine phosphate mining! The dredging of 3‐6 metres of the sea floor over potentially 2233 square kilometres by just one company will cause direct irreparable destruction to the building blocks of the entire marine ecosystem causing direct harm to the food supply chain for fish, humans, endangered sea turtles and endangered marine mammals. What if more than one company is granted this same permission?

Our concerns
Our youth face a bleak future. Studies show that by 2050 there may be no more fish in the sea because of what we are doing to the ocean worldwide. This is bad news for the environment across the planet. In a desert country like Namibia, this is a serious threat on a basic survival level: fish are good for food security, especially in times of drought.

Yet, at this most critical time of drought, our government is being asked by international marine phosphate mining companies to compromise the integrity of Namibia’s environmental laws by promoting industry that will directly and dramatically decrease the sustainability of the living marine resources, leaving behind an ocean that cannot provide for current or future generations.

The Environmental and Social Impacts of Marine Phosphate Mining

Worldwide, land based phosphate mining and processing has left a serious pollution problem behind. This is because phosphate rock contains various metals and radioactive elements. Among these elements are heavy metals which include: Cadmium, Arsenic, Lead, Mercury, Chromium, Vanadium, Selenium and two radioactive elements, Uranium and Thorium. Levels of radioactive materials are typically much higher in marine phosphate.

Phosphate mining of the seafloor is a major concern for leading marine scientists worldwide. In Australia, the Government of the Northern Territory considered all seafloor mining as such a threat that a moratorium was imposed while further environmental and risk assessments were conducted. Namibia followed suit and also placed a moratorium on marine phosphate mining in 2013 while a strategic environmental assessment was conducted. Although this study is not yet complete, the Environmental Commissioner has granted Environmental Clearance for a marine phosphate company to go forward, despite the Minister of Fisheries and Marine Resources legal request not to grant the Clearance.

This is after other countries have repeatedly prohibited marine phosphate mining due to its dangerous implications for the marine environment. In 2016, Mexico’s federal environmental authority denied a license for the Don Diego marine phosphate mining project because the project would destroy the seabed‐dwelling organisms on which the endangered loggerhead turtles feed.

Specialists and international experts have identified significant and critical issues that require further investigation and to date these have not been addressed by the companies seeking to mine marine phosphates in Namibia. Some of the critical environmental impacts include:

Impacts on the Ocean
‐ Dredging of 3‐6 metres of the sea floor will cause direct irreparable destruction to the building blocks of the marine ecosystem in the benthos layer causing direct harm to the food supply chain for endangered sea turtles, endangered marine mammals, fish and humans.

‐There will be direct harm to hatcheries for fish species such as juvenile monk and hake.

‐ There are serious potential negative effects on the spawning of fish.

‐ There are serious potential negative effects of a disturbed ecosystem (turbidity) on marine predators including hake and endangered African penguins.

‐The release of hazardous substances including radioactive materials, methane gas, and hydrogen sulphide will directly kill wildlife and cause many commercial fish stocks including hake and monk to be unmarketable and not sale quality as food quality regulations for export are stringent.

‐ Soluble phosphate entering the water and acting like a fertilizer will increase algal blooms and harm shellfish and other species.

‐ Change in the nutrient balance in upwelling will affect the Benguela Current marine ecosystem which relies heavily on the upwelling of nutrients which are carefully balanced.

‐ Increase in phosphate nutrients will increase algae and bacteria in the water making salt for salt mining too poor of a quality for sale.

Impacts on the Land
-According to the Environmental Impact Assessment, 125,500 tonnes of phosphate and radioactive and other waste will be discharged on shore during each week of operation, with the transfer to shore being once every 2-3 days. These are radioactive substances that will certainly have numerous environmental impacts, especially for human and environmental health.

‐ A buffer pond containing radioactive substances is set to be placed by the internationally protected RAMSAR site of Sandwich Harbour and a National Park, causing direct harm to the legally protected land ecosystem.

‐ A pipeline will cross through two National Parks carrying radioactive substances, further exposing the public and the wildlife to radiation.

‐ A processing plant and tailings dam by the sewerage works in Walvis Bay will disperse radioactive materials and chemicals into underground water and through the air.

‐ The potential for flood events and sea level rise will cause radioactive and chemical waste to be released throughout the town of Walvis Bay as well as into the surrounding National Parks.

‐ Plans to release waste products and seawater back into the ocean will cause additional negative impacts on marine life.

‐ Water requirements of 320 cubic metres of fresh non‐potable water per hour will impact on the local desert communities and environment to which this fresh water is a vital resource, especially in the hyper‐arid coastline during times of drought.

The Laws of Namibia are Being Blatantly Ignored

The Constitution states that the government must maintain essential ecological processes and biological diversity on a sustainable basis for current and future generations. The late honourable Chief Justice Mahomed described the Constitution as a "...is a mirror reflecting the national soul/the identification of the ideals and aspirations of a nation, the articulation of the values bonding its people and disciplining its government." Honourable President Hage Geingob, we appreciate that you were recently quoted in agreement stating that “The environment is part and parcel of Namibia’s foundation of democracy, peace and stability. It has been so in the past, it is so today and will be so tomorrow. Protection of the environment is enshrined in our Constitution.” Ignoring the Constitutional provision which protects the environment would be like losing the soul of our nation.

This Constitutional provision led to the formation of the Environmental Management Act of 2007 and the Environmental Impact Assessment Regulations of 2012. These laws protect the people and state clearly that “the participation of all interested and affected parties must be promoted and decisions must take into account the interest, needs and values of interested and affected parties.” Interested and affected parties have raised numerous concerns in the past and substantial concerns by the public and scientists about significant effects have been effectively brushed under the surface. Cumulative impacts of various activities on the marine and land environment have also not been considered. An Environmental Impact Assessment for the land component of the project has not been completed. Yet according to Namibian law, these studies must be conducted prior to any decision being taken and the cumulative and potential significant effects of activities on the environment raised by concerned parties must be considered in time and carefully.

According to the Environmental Management Act of 2007, damage to the environment must be prevented and activities which cause such damage must be reduced, limited or controlled. In addition, the law enshrines the precautionary principle stating that all decisions must be made with caution especially when there is a lack of full scientific certainty about possible environmental degradation. The burden is on the marine mining companies to remove all doubt of the environmental impact if they wish for the mining projects to go forward. Yet, they have never made their verification scientific reports available to the public or other interested and affected parties. Instead, they expect the government of Namibia to ignore its own seriously concerned public and make a decision based on reports that have not gone through a public consultation process as required by law. The mining companies hope to gain a larger profit by ignoring the laws of Namibia.

Finally, the Environmental Management Act of 2007 states that renewable resources must be used on a sustainable basis for the benefit of present and future generations. Fishing, aquaculture, tourism and salt mining, when managed properly, have proven to offer a substantial potentially sustainable benefit to the Namibian economy over the long‐term. In fact the fishing industry alone offers $4.8 billion dollars in foreign currency earnings and directly employs around 15,000 people. Yet marine phosphate mining is a direct threat to the continued existence of these and other industries, such as tourism, as demonstrated by a significant number of marine and social specialists. According to Namibian environmental laws, the government is required to prioritize industry that causes the least damage to the environment over industry that causes more damage. Simply put, in no way must an unsustainable short‐term option be adopted at the expense of the potentially sustainable long‐term option.

The Decision
The government must not take its decisions lightly. They are deciding what world Namibian children and future generations will be faced with and how likely they will be to survive. In Namibia it is the duty of the government to ensure a sustainable environment for current and future generations. The government of Namibia must choose whether they will fall under the pressure of international mining giants to ignore critical provisions of law that protect the environment and the people of Namibia or whether they will take pride in their entrusted duty under the Constitution to ensure a sustainable environment for current and future generations. May the highest authorities in Namibia hear the plea of the people and say no to marine phosphate mining once and for all.

Today: Marcia F. is counting on you