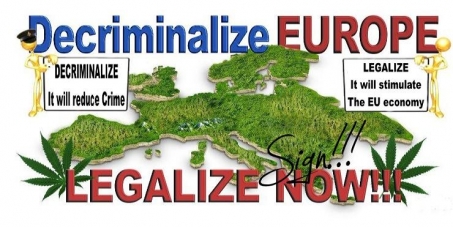 We call on the EU commission to legalise and decriminalise the trade and production of Cannabis.

By continuing you agree to receive Avaaz emails. Our Privacy Policy will protect your data and explains how it can be used. You can unsubscribe at any time. If you are under 13 years of age in the USA or under 16 in the rest of the world, please get consent from a parent or guardian before proceeding.
This petition has been created by Legalize A. and may not represent the views of the Avaaz community.
x

Sign this petition
Legalize A.
started this petition to
European Commission, All European governments, International, national and local media
We need fair and clear laws , new regulations which the entire Cannabis industry, government and society can accept. Not a policy that is based on the limited mindset of the prohibitionist . But a responsible policy in which freedom is paramount , which provides a safe haven for Cannabis consumers...

'' All rules which are impossible to enforce , only imposed to make legal Cannabis business impossible should be removed immediately .

Cannabis for Cannabisshops should be grown commercial . Based on similar legislation , which is very well applicable . Commercially grow'n cannabis for consumption will fall under the strict supervision of our ministries . Cannabis should have a official label ,which is associated with a quality code .

Professional nurseries which supply Cannabisshops may produce and stock as many Cannabis required in a regulated market . But they can only sell cannabis to Cannabisshops . The Cannabisshops can therefore stock the amount according to their turnover . Eventually Cannabis-shops are subjected to the trade laws as a pub for example...

In addition it should be possible to grow cannabis for personal use in your own home .This can both be indoors and outdoors . As already allowed with other plants , for example, optionally under a special growing light . Without being arrested, fined or kicked out of your home.

A fair policy can then be presented to your countries parliaments in the usual way. So the government can make a well informed decision . A policy which is proposed by the Int. cannabis community , a policy which decriminalizes, legalizes , regulates and restructures the European cannabis trade and production.

Simply because of the social, cultural and economic importance . ''

There for all EU Member States are obliged to do everything possible to positively stimulate the European economy. Governments of EU Member States should propose legislation of cannabis trade and production as an incentive for the European economie. It is not difficult to collect figures and financial data from countries where this is already happening. Countries where Cannabis is semi legal ,like in the Netherlands, or Spain, or like the change in Colorado, all other examples we know of included. Because the examples are convincing enough to end prohibition and decriminalize and legalize the trade and production of Cannabis. The huge revenues, employment, entrepreneurial opportunities can ensure that the EU economy gets better. It is not credible for EU politicians to ignore this opportunity. I wonder how the Brussels summit would react if it is proposed by delegates from all countries in the European Union. Given the fact EU economist already announced the next phase of the EU crisis...

When 1 million european ''Cannabis legislation & decriminalisation'' supporters sign this petition, we will deliver this petition to the European Commission and all European governments, international, national and local media, with the demand that it acts on the proposal of the people, to decriminalize and legalize the trade and production of Cannabis. Sign here and share it with all your friends and family to make sure that our politicians can no longer ignore this solution.

Today: Legalize A. is counting on you

Legalize A. needs your help with "We call on the EU commission to legalise and decriminalise the trade and production of Cannabis.". Join Legalize A. and 7,119 supporters today