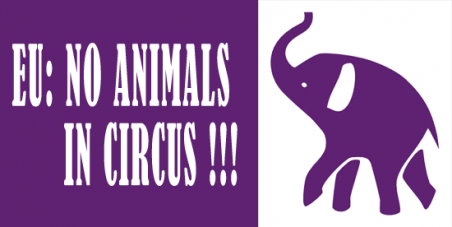 Animals are not staying in circuses by choice – they work like slaves for the people who make money at the expense of their suffering. They are detached from the natural environment and their herds, kept in cramped cages or tied with chains on small runways. Transport leads them to the constant stress. Many of them reveal stereotypical behaviour and other signs of mental illness.

Performing strange tricks is not in the nature of animals. They are forced through brutal methods of dressage and starvation. It is impossible to teach children valuable lesson from observing tigers spinning around in circles in a small space or bears dressed in a skirt and forced to stand on the front paws.

Circus art can be beautiful when it is created by artists who are trained by their own choice and like to demonstrate their skills.
A lot of people think that circuses with animals belong to history, or that this form of entertainment is on the decay. Unfortunately, there is still a lot of people who attend circus shows and don’t realize that they are supporting the business built on animals’ suffering.

The campaign will succeed through collaboration and support of different organizations and individuals who want to help animals, which are doomed to a sad life in steel cages and unnatural behaviour in entertainment shows.

Pleas join us and SING THE PETITION NOW!!!

Today: Ula Z. is counting on you