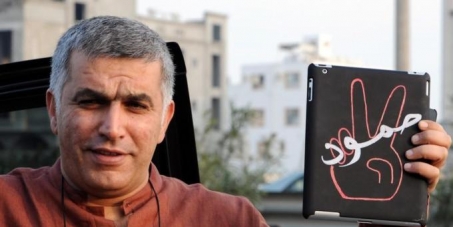 FREE NABEEL RAJAB FROM THE AL KHALIFA DICTATORSHIP IN BAHRAIN

By continuing you agree to receive Avaaz emails. Our Privacy Policy will protect your data and explains how it can be used. You can unsubscribe at any time. If you are under 13 years of age in the USA or under 16 in the rest of the world, please get consent from a parent or guardian before proceeding.
This petition has been created by Peter C. and may not represent the views of the Avaaz community.
x

He was already serving a 3 month sentence for sending a message on Twitter criticising the Prime Minister of Bahrain, Khalifa bin Salman Al Khalifa, a ludicrous charge that was later dropped.

The same prime minister who has held office for more than 40 years and last year set up a "High Coordinating Committee for Human Rights". In Bahrain this is seen as a joke.

In fact the Al Khalifa family have been controlling Bahrain for more than 200 years, half the Cabinet are family members and the extended family controls all important posts in Bahrain, including the judiciary.

We believe that the decision to imprison Nabeel Rajab is purely political in order to prevent him from encouraging others to demand their universal right to democracy, freedom of expression, equality and freedom of assembly.

Under the guise of pretending reform the Al Khalifa family has ruthlessly suppressed dissent, imprisoned many protesters on false charges and critically injured and killed many of its civilian population.

Many of Bahrain's senior officials, including members of the royal family, have been accused of torturing detainees - but none have been brought to justice.

Nabeel Rajab is an internationally known human rights activist who is also a director of the Gulf Center for Human rights and a member of the Board of Advisors for the Middle East and North Africa division of Human Rights Watch in the USA. In 2011 he was awarded the Ion Ratiu Democracy Award because he "has worked tirelessly and at considerable personal peril to advance the cause of democratic freedoms and the civil rights of Bahraini citizens".

The US and the UK, while saying they support democracy and freedom elsewhere, have been slow to pressurise the Government of Bahrain to reform because of their mutual interests of opposing Iran across the Gulf.

Although Nabeel's sentence was reduced on appeal in December 2012 to 2 years, It is now time that the US, the UK, the EU and the UN take positive and effective action to get Nabeel Rajab set free.

PLEASE SHOW YOUR SUPPORT BY SIGNING THIS PETITION AND SHARING IT WITH OTHERS ON SOCIAL MEDIA ACROSS THE WORLD.