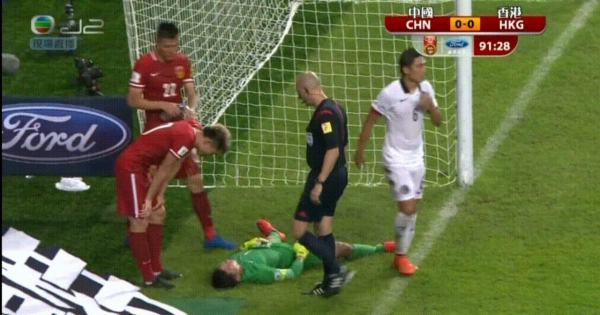 By continuing you agree to receive Avaaz emails. Our Privacy Policy will protect your data and explains how it can be used. You can unsubscribe at any time. If you are under 13 years of age in the USA or under 16 in the rest of the world, please get consent from a parent or guardian before proceeding.
This petition has been created by Wing T. and may not represent the views of the Avaaz community.
x

We are writing to request FIFA and its Disciplinary Committee to conduct a disciplinary investigation against Mr ZHENG Zhi, member of the China PR world cup team, for his unsportsmanlike conduct at 91:27 during the match between Hong Kong and China PR at 2018 FIFA World Cup Asian Qualifying stages on 3 September 2015.

The live broadcast of Channel J2 of Hong Kong Television Broadcast Limited clearly showed that Mr ZHENG intentionally spat on Hong Kong’s goalkeeper Mr YAPP Hung Fai, but the referee failed to acknowledge this misconduct there and then. Subsequently, Mr YAPP alleged on social media that not only did Mr ZHENG spit on him, but he also called him a dog during the match.

We believe the spirit of fair play should transcend differences in, inter alia, origin, race and culture. Mutual respect at the highest order should be championed by all teams. We consider Mr ZHENG’s behaviour a serious misconduct, which has undoubtedly sparked hatred between the people of Hong Kong and of China PR while violating FIFA’s principles, and thus should not be tolerated.

To avoid further insults to the World Cup, to FIFA and to sportsmanship, in accordance with Section (j), Article 47 of FIFA Disciplinary Code 2011 and Section 3.2 of FIFA Code of Conduct 2012, we urge FIFA to investigate against Mr ZHENG's outrageous behaviour during the said match and, where appropriate, impose sanction on the player to demonstrate the consequence of disrespecting justice and fellow players in the international sports arena.

We trust that under no circumstances would FIFA indulge unfair, unjust or disrespectful behaviour. To ensure that such incident would not happen again in the coming matches, we would appreciate it if FIFA would take the matter seriously and initiate necessary action immediately.

Thank you very much for your attention, and looking forward to hearing from you soon.

Today: Wing T. is counting on you