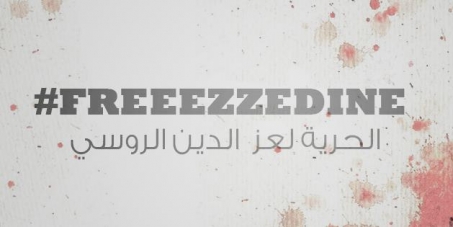 For the liberation of all the Moroccan political prisoners: international solidarity with all the hunger strikers.

By continuing you agree to receive Avaaz emails. Our Privacy Policy will protect your data and explains how it can be used. You can unsubscribe at any time.
This petition has been created by mohamed and may not represent the views of the Avaaz community.

Ezzedine is a Moroccan student, member of the students' union in his city, Taza, in northern Morocco. He was arrested on December 1st, 2011, at his university during a students' protest and accused of belonging to an "unlawful organization".

He has been on hunger strike since December 19, 2011. His health is deteriorating by the hour.

Ezzedine was joined in his hunger strike by 4 other students detained in the city of Fez: Ibrahim Saidi, Mohamed Ghaloud, Mohamed Fettal, Mohamed Ezaghdidi. They are protesting their arbitrary arrest and the conditions of their detention.

In a letter Ezzedine sent from his prison cell he claims to have been tortured. One of the detained students, Mohamed Ghaloud, says he was sexually assaulted by his interrogators.

Please ask for the release of Ezzedine and all his colleagues. Their lives are in danger. Sign the petition.

For the liberation of all the Moroccan political prisoners: international solidarity with all the hunger strikers.

Morocco is subject to a huge wave of repression. Though the government prides itself in having promulgated a new Constitution advertised as a democratic advance, citizens' demonstrations have been systematically repressed for months. The list is long: from the military expulsion of unemployed graduate students everytime they demonstrated, to the extremely brutal eviction of hundreds of inhabitants of shantytowns, the military occupation of whole towns like Taza or around al Hoceima and the criminalisation of the workers 'unions actions. It has become almost impossible to demonstrate in Morocco now or to demand basic social or democratic rights. It's a return to the "lead years" policies in the name of the restoration of the "State Authority" which was fragilised by the outburst of the 20th February movement for social justice, suppression of despotism and which initiated the social and democratic awakening of a large number of sections of the Moroccan society.

The government represses and condemns: tens of citizens, militants or not, are sentenced to prison; Young unemployed people in Safi have been sentenced to 32 years of detention. Members of the National Student Union have been severely tortured. They refute the reasons and the conditions of their detention and have decided to go on an unlimited hunger strike to demand their rights and their liberation.

Ezedine Erroussi is a student from Taza. Last December he was arrested during a demonstration in his university held to ask for better conditions of the students' life and was condemned for belonging to an "unauthorized organization". His fellows demonstrators Ibrahim Saidi, Mohamed Galoud, Mohmed Fettal and Mohamed Ezaghdidi were sentenced for the same reason. Ezedine Erroussi has been detained for more than 90 days. He has become extremely weak and is maintained in complete isolation. The students arrested in Fès have been detained for more than 60 days.

The physical condition of the students detained in the Safi prisons is deteriorating fast. The government and its torturers has chosen to let them die, counting on the silence of its allied European and American States who are more interested in protecting their mutual interests than the rights and liberties of the Moroccan people.

We refuse this complicity. We refuse to remain silent in front of the programmed death of those who fight for a Moroccan Spring. We demand that government repression be stopped and we demand the liberation of all prisoners. We proclaim our total solidarity with the hunger strikers until their demands are satisfied.

Today: mohamed is counting on you

mohamed needs your help with "For the liberation of all the Moroccan political prisoners: international solidarity with all the hunger strikers.". Join mohamed and 44 supporters today