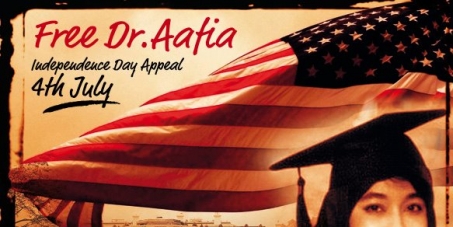 By continuing you agree to receive Avaaz emails. Our Privacy Policy will protect your data and explains how it can be used. You can unsubscribe at any time. If you are under 13 years of age in the USA or under 16 in the rest of the world, please get consent from a parent or guardian before proceeding.
This petition has been created by Faisal K. and may not represent the views of the Avaaz community.
x

Sign this petition
Faisal K.
started this petition to
Dr. Aafia Siddiqui is an American-educated Pakistani cognitive neuroscientist. Not long after the September 11 attacks, Dr. Siddiqui left the United States for Pakistan in 2002. After the capture of Khalid Sheikh Mohammed in March 2003 in Rawalpindi, Pakistan, by the Inter-Services Intelligence, he has stated he gave names of innocent people under torture to "please his captors" and Siddiqui’s lawyers believe her name was one of these. After she was named by him, Siddiqui disappeared for five years. Siddiqui and her children's whereabouts and activities from March 2003 to July 2008 are a matter of dispute. She reappeared in Afghanistan under detention in 2008. Although authorities claimed she was found in possession of bomb-making instructions and materiel (including sodium cyanide) at the time of her arrest in Afghanistan, Dr. Siddiqui was not charged for any terrorist-related activities. Instead she was tried and convicted in U.S. federal court for assault with intent to murder her U.S. interrogators in Afghanistan - charges that carried a maximum sentence of life in prison. Siddiqui was ultimately sentenced by a United States district court to 86 years in prison in a trial that critics have called "a grave miscarriage of justice".

The trial lasted for 2 weeks and the jury deliberated for 2 days before reaching a verdict. On February 3, 2010, she was convicted and found guilty on all counts. , despite the following discrepancies:

· The court proceedings were flawed, and limited to the incident in Ghazni, which itself lacked concrete evidence.

· It is still unexplained how a frail, 110 pound woman, confronted with three US army officers, two interpreters and two FBI agents managed to assault three of them, snatch a rifle from one of them, open fire at close range, hit no one, but she herself was wounded.

· There were no fingerprints on the gun.

· There was no gunshot residue from the gun.

· There were no bullet holes in the walls from that particular gun.

· There were no bullets cases or shells in the area from the specified gun.

· The testimony of the government’s six eyewitnesses contradicted each other.

· Aafia’s disappearance, torture and missing children were not at all addressed during the court case.

Today: Faisal K. is counting on you