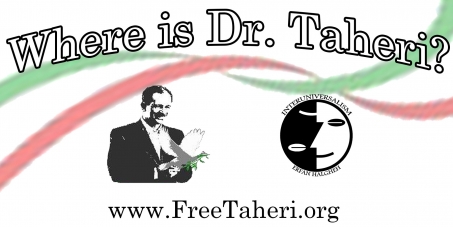 By continuing you agree to receive Avaaz emails. Our Privacy Policy will protect your data and explains how it can be used. You can unsubscribe at any time. If you are under 13 years of age in the USA or under 16 in the rest of the world, please get consent from a parent or guardian before proceeding.
This petition has been created by interuniversalism -. and may not represent the views of the Avaaz community.
x

Sign this petition
interuniversalism -.
started this petition to
United Nations, Human Rights Organizations, World Governments
www.FreeTaheri.org More info:
Dr. Mohammad Ali Taheri is a prisoner of conscience in Iran. He is a genius innovator, the founder of Interuniversalism “Erfan Halgheh”, and the two complementary and alternative medicines; Faradarmani and Psymentology. He has been in solitary confinement since May 2011 in Tehran-Iran, as he was accused of apostasy, battle against God, insult of prophet, and etc. He has been kept in a solitary confinement the whole time to minimize his contact with other individuals. He has been suffering from the extreme mental and emotional torture while illegally imprisoned in Iran.
On April, 2014 Mohammad Ali Taheri wrote a letter inside the prison which was initially sent to Mrs. Shahnaz Niroomanesh the director of campaign who is the trusted student of Mr. Taheri, and the president of Interuniversalism Inc. The letter was sent as an attachment to a covering letter addressed to Mrs. Niroomanesh which authorized Mrs. Niroomanesh to translate, prepare, and publicize the following letter to UN special rapporteur, and mass media. The letter was prepared, translated, and delivered by Interuniversalism Inc (non-pro fit) in California, USA, on April 25, 2014, based on the handwriting letter of Mohammad Ali Taheri.
He indicated the details of human rights violations in two separate parts. He indicated explicitly in the letter about violations of judges, interrogators and other related parties at fault against himself and other cellmates. Also, he declares his preparation for personal testimony of himself and other accused imprisoned about human rights violations of revolutionary guards in Iran. In the letter Dr. Taheri mentioned about many psychological torture by threatening the life of his family members to get admission to apostasy, or being in contact with United States that the pressures were hard enough for him to commit suicide 4 times in order to save his family from their harm and himself of false admission. He also mention's not having a chance to meet his lawyers and no access to books or information for his defense, in addition that the prosecutors were giving false information to higher authorities and religious figures, in order to get his apostasy admission and execution sentence.
Master Taheri was on a hunger strike for the eleventh times to protest his latest charge corruption on earth (Mofse-de Fel-Arz), and apostasy (Ertedad); and the violations of human rights against him since October, 2014. The Iranian government had decided to certainly execute him as they have convicted him of apostasy based on three Ayatollahs (including Ayatollah Makarem Shirazi) Islamic orders (Fatwas). Dr. Mohammad Ali Taheri was shown his apostasy order in prison, and he protested against the apostasy order by going on a hunger strike.
He went in a state of coma due to his hunger strike in November, 2014. He was transferred to a hospital for medical treatments. Before he completely recovered, he was forced and transferred back into his solitary confinement prison cell. As the authorities, did not care about his demands of closing his open cases of apostasy and corruption on earth, and they even attempted to force him sign illegitimate obligations, he denied and therefore continued his hunger strike.
As a result of his long term hunger strike, he had a heart attack in December, 2014 and was transferred to a hospital. He is not allowed to have any visitors, and is completely isolated, although he is suffering from the heart attack and physical weakness.
The sources added that Mohammad Ali Taheri has been under custody of Internal Agency of Intelligence Services of Iranian Reveloutionary Gaurds (HAFA VAJA) with false accusation of corruption on earth since November 28, 2014, and has been transferred from prison to an unknown location to this date.
Due to his urgent and critical situation, we are demanding your support to condemn the Iranian government to close his illegitimate case, and conduct investigations about his health condition, and further investigation for other prisoners in Iran. Also we demand an interview with him, and the United Nations human rights rapporteurs to ensure about his health condition, and the location he is being held by the Internal Agency of Intelligence Services of Iranian Reveloutionary Gaurds since November.
From November 2014 to July 2018 due to contradictory news, there had been uncertainty about Mr. Taheri’s health condition,So that according to the available evidence and the news of the possibility of lose his lives was announced by the Campaign.In 2016, some of the campaign supporters sent a letter to authorities in Australia, Canada, the United States, and many European countries to force the Iranian governments to bring Mr. Taheri to the public to ensure his healthIn July 2018, during 2 days temporary release from prison Mr. Taheri contacted the directory of Taheri Campaign (Mrs. Sharnaz Niroomanesh) to inform about his health condition. To this date January 2019, he has been kept in prison around 8 years in the Islamic Republic of Iran. Even though, he has been acquitted as innocent based on Iran’s law; the verdict of “not guilty” has not been ruled to this date.
In the recent news, after eight years of imprisoned Mr. Taheri sent a letter in protest of injustice and injustice from inside prison to current Iran’s president Hassan Rouhani, and he has requested to renounce his Iranian citizenship voluntarily.
More info: http://tahericampaign.org/
برای کمک به رساندن صدای مظلومیت استاد محمد علی طاهری به گوش جهانیان، این کمپین را امضا کنید. برای امضا کافیست یک آدرس ایمیل فعال خود را به همراه نام واقعی یا نام مستعار خود را در سمت راست وارد کرده، اطلاعات را تکمیل کنید و گزینه "ساین" را کلیک نمایید
اطلاعات بیشتر https://tahericampaign.com/

Today: interuniversalism -. is counting on you