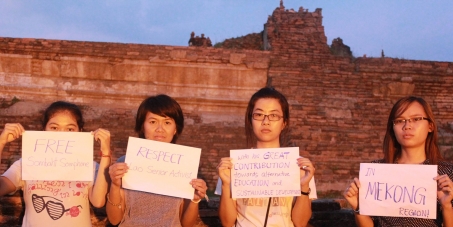 "Unfortunately, we often leave education to schools and specialized institutions and then development to development planners/specialists and then wonder why people coming out of educational institutions seldom link what they learn with what they do in life. Hence, as educators and development practitioners we should be stressing the inter‐connectedness between four areas of education and development mainly: Economy, Well‐being, Nature, and Society as the fundamental building blocks of sustainability and happiness. In summary, how we live and how we educate (ourselves, our children, and our peers) will dictate our future." - Sombath Somphone at the 10th API Regional Workshop

Mr. Sombath Somphone has been disappeared since Dec 15, 2012. He is the founder of Participatory Development Training Center (PADETC), Vientiane, Lao PDR. He has been working for 30 years to promote sustainable development through training and educating young people. His hopes rest with the young. He urges them to remain mindful of their country's traditional values even as global forces grow stronger.

In 2005, he received the Ramon Magsaysay Award for Community Leadership in recognition of his hopeful efforts to promote sustainable development in Laos by training and motivating its young people to become a generation of leaders.

According to information collated, on the evening of December 15, 2012, Mr. Sombath was driving his jeep in Laos-capital Vientiane, following the car driven by his wife, Ng Shui Meng, to their home from office for dinner, when he was hailed down by two policemen on Thadeu Road. Recorded footage of a screening of what is purported to be the closed-circuit television capture of the incident shows the arrival of an unidentified man on motorcycle, who hurries over to the police post where Mr. Sombath is being questioned, soon after Mr. Sombath steps out of his jeep. Later, the same motorcyclist appears to drive Mr. Sombath’s jeep away. The footage further shows the arrival of a white pick-up truck, with flashing hazard lights.

On Dec 19, the Laotian government has responded to his wife appeals and the footage of what appears to be an enforced disappearance by offering that it is “possible Mr. Sombath has been kidnapped perhaps because of a personal conflict or a conflict in business.”

We, the undersigned, hereby urge the Lao government to conduct urgent and transparent investigation into the disappearance of one of its most respected civil society leaders.

Today: Melva Y. is counting on you