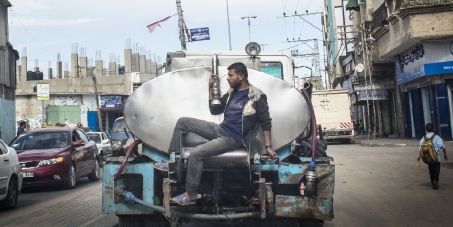 Gaza to run out of drinking water by 2016

By continuing you agree to receive Avaaz emails. Our Privacy Policy will protect your data and explains how it can be used. You can unsubscribe at any time. If you are under 13 years of age in the USA or under 16 in the rest of the world, please get consent from a parent or guardian before proceeding.
This petition has been created by Jovita T. and may not represent the views of the Avaaz community.
x

Sign this petition
Jovita T.
started this petition to
European Leaders
Gaza’s population of 1.6 million Palestinians are without clean drinking water. The only source of water they can access—the underground water aquifer—is being over-utilized and is now highly polluted with sea water and sewage intrusion. The UN warns that unless a solution is found to provide Gaza with safe and affordable water, Gaza’s aquifer will become unusable by 2016, and irreversibly damaged by 2020 .

Today, only 5% of the water Palestinians in Gaza extract from the Coastal aquifer is now safe to drink. Most families in Gaza are forced to buy drinking water from private companies at high cost, with some paying as much as a third of their income on water.

The portion of the Coastal aquifer running beneath Gaza represents only a small percentage of the total freshwater resources available to Israelis and Palestinians. Israel continues to exploit 90% of the available freshwater for exclusive Israeli use – particularly the underground Mountain aquifer in the occupied West Bank – while Palestinians have access to less than 10%. It does so in violation of international water law, which calls for these resources to be shared “equitably and reasonably” between Palestinians and Israelis.

There is a solution, and it starts with the implementation of Palestinian water rights. If Palestinians have access to their rightful share of the available water resources, and if Israel lifts its blockade over the Gaza Strip, which restricts water imports as well as the entry of materials and goods needed to upgrade and repair its deteriorating water infrastructure, many of Gaza’s water problems would be solved.


WHAT WE HAVE ACHIEVED?
On the occasion of World Water Day 2014, this petition signed by over 12.784 people worldwide including citizens of all EU member states, was delivered to Hannes Swoboda, the President of the Progressive Alliance of Socialists & Democrats in the European Parliament on 20 March 2014.

The petition was handed over by a representative of EWASH, a group of 27 international and national NGOs as well as UN Agencies seeking to improve water, sanitation and hygiene conditions in the occupied Palestinian Territory. Hannes Swoboda, President of the S&D Group, accepted the message and expressed his support for the initiative, noting that “access to water and sanitation is a fundamental human right, which governments and international institutions need to guarantee for everyone."

Please help us achieve 20.000 signatures so we can deliver even stronger message to the decision makers in Europe!

Today: Jovita T. is counting on you