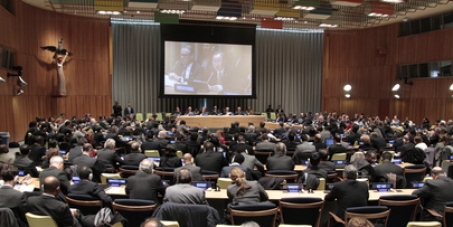 General Assembly of The United Nations: Confirm the relevance of "All Rights for All Right" right now.

By continuing you agree to receive Avaaz emails. Our Privacy Policy will protect your data and explains how it can be used. You can unsubscribe at any time. If you are under 13 years of age in the USA or under 16 in the rest of the world, please get consent from a parent or guardian before proceeding.
This petition has been created by J W. and may not represent the views of the Avaaz community.
x

However, as predicted by the New Zealand delegate (and a few others) at that time, the United Nations greatly disappointed all peoples of the World, by failing to do this. Instead they succumbed to pressure brought by some individual States and continuing conflicts in others, and failed to issue such Convention or Covenant(s) until 1966 also under the heading of "The International Bill of Human Rights".

These 2 'legally binding' International Covenants then "entered into force" separately too, on the 3rd Jan and 23rd March 1976, because of a 'ratification process' which took 10 years. Again, because of political systems which appear to have been intent on 'denying, diminishing or destroying' the ability of Human Beings, from exercising any of their rights immediately. Or to be protected from any violations of their rights by "any State, group or person" automatically since 1948, or any time at all in the future it seems, they have had little or no effect at all.

The above principle was included in Article 30 of The Universal Declaration and Articles 5 of each of the 'legally binding' Covenants. Yet for 65 years since the creation of "The International Bill of Human Rights", most UN Member States have ignored it. And are still doing so, even where they claim to respect those rights, and are allegedly 'developed and rich countries' and/or democracies who've proclaimed such beliefs.

However, as the UN Human Rights review committees have found since the 1980's, and also stated in some of their General Comments, "wealth is not a pre-requisite to Member States respecting human rights". If anything Human Rights need to come first, otherwise wealth will not follow.

As Corporate exploitation of many countries' natural resources, through State corruption, has demonstrated over the last 65 years too, and still does to this day. So will the General Assembly now therefore confirm that Human Rights must be respected by 'domestic laws and administrative systems'?

As they specified in General Comment No.9 of 1998 (which replaced GC No.3 of 1990 from the ICESCR committee); and also No.3 of 1981 from the ICCPR committee. However there are many other examples of general comments which have been routinely ignored by Member States too.Including those which say that States were supposed to educate their citizens about their rights, whereas they have almost 'universally' failed to do that too. Because if the people knew their rights, then they would know that politicians have conspired to deny everyone in the world "all rights for all", for so long.

Therefore, in the face of such indolence and intransigence, it is time for the United Nations to 'proclaim' that every citizen of the world has the right to demand that these rights are now 'self operating', as they should have done in 1948. Against any and all violations of their rights by "any State, group or person". And that any dispute about such must be resolved by independent and impartial tribunals (established by the State) free of charge to the injured party, or collective parties if others share the same violations.

If any 'legal professionals' (who have also been party to a system which has denied "all rights for all" for decades) feel that they are worthy of compensation for their work, then the tribunal should also establish their 'reward', when determining the compensation for the victim(s) as part of their right to 'just satisfaction'.

The people of the world should not be denied their rights by any 'legal system' which costs them extortionate fees. When those who are party to them have been, and are, simply seeking to control who has access to their rights, based on wealth, for their own ends.The legal profession is nothing more than a 'group' which 'engages in an activity' of conducting hearings and allegedly Administering Justice. So they have had no right to violate another's rights, by making their services unaffordable to them, or even at the cost of losing their home, as frequently occurs. As I'm also sure the UN is aware of, many judgements are arbitrary too without any 'hearing'.

Will they also therefore confirm that any rights included in The Universal Declaration, which were overlooked in either of the two aforementioned Covenants, must also be treated as legally binding, and from what date(s), bearing in mind their culpability in this?

But the United Nations also cannot continue to operate, if its own house is not in order and it is not actually upholding the fine principles which it was established under in 1945, in the aftermath of World War 2.

Perhaps the UN General Assembly should consider the fate of The League of Nations, which was effectively shut down when it failed to prevent WW2. As likewise, being their only alternative to doing nothing effective for all human beings everywhere in the world, if they choose to ignore this petition for "All rights for all, right now".