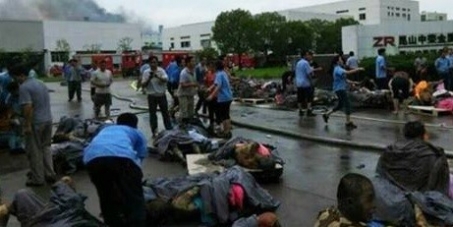 By continuing you agree to receive Avaaz emails. Our Privacy Policy will protect your data and explains how it can be used. You can unsubscribe at any time. If you are under 13 years of age in the USA or under 16 in the rest of the world, please get consent from a parent or guardian before proceeding.
This petition has been created by China L. and may not represent the views of the Avaaz community.
x

Sign this petition
China L.
started this petition to
General Motors CEO Mary Barra
GM must assume responsibility for an explosion that has killed at least 75 workers and injured another 186 at a factory making GM wheels.

The deadly metallic dust explosion occurred on August 2 at the Zhongrong factory, a GM wheel supplier in Kunshan, Jiangsu Province in China. The explosion and ensuing fire has taken more than 75 lives and caused more than 186 people to suffer severe skin burns and other injuries. This is the most tragic factory explosion of its type to have happened over the past few years.
Adapting to stringent price demands from GM, the factory cut costs by negating basic safety standards.


In a statement about the incident, GM acknowledged that Zhongrong is its supplier factory. But GM refused to take responsibility for the tragedy, instead passing the buck to a partner factory in China.

It is GM’s responsibility to ensure safe and fair working conditions for the people making GM products.

“I saw some people running out of the building next to us covered in fire before falling on the grass and dying,” one witness said.

The high density of aluminum magnesium particles in the enclosed production facility, along with poor ventilation, had created a time bomb in the factory. A spark is all that was needed to set it off. Proper ventilation equipment, a warning system, and safety training for workers could have significantly reduced the chance of such a tragedy, according to one official at Kunshan Environmental Protection Bureau.

However, in order for the factory to maintain a profit amidst GM’s profit-maximizing price demands, the factory cut costs by choosing not to institute safety measures. This exposed workers to a highly polluted environment that caused harm to their lung and skin and eventually cost many workers their lives. Workers were also exploited through long overtime hours, including on the weekend which is when the explosion occurred.

Workers have paid the ultimate price for the profit maximization of GM. We demand that GM take responsibility for victims and the prevention of future tragedies occurring again in its supply chain!