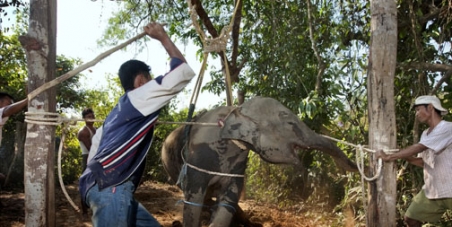 By continuing you agree to receive Avaaz emails. Our Privacy Policy will protect your data and explains how it can be used. You can unsubscribe at any time.
This petition has been created by Paul C. and may not represent the views of the Avaaz community.

Sign this petition
Paul C.
started this petition to
General Prayuth Chan-Ocha, Commander & Chief, Thailand.
Used for centuries to domesticate wild elephants, this torture method is still accepted as the only viable training method for elephant handlers and is used in almost every elephant attraction in Thailand. And, once they have their 'souls stamped out', they are simply vessels entertaining people. They are chained.

The barbaric ritual of 'crushing' a young elephant's spirit in order to domesticate it, due to the belief that establishing domination through torture is the only way to tame it, is called the Phajaan.

It is mainly practised in the Karen province of Thailand. Every captive elephant one sees in Thailand with the exception of those still living in the wild and born in protected sanctuaries has more than likely gone through it. The one's begging in the streets, the ones in trekking camps, breeding camps, tourist camps, and zoos. At least more than half of them have gone through the Phajaan.

Tourists, before you use an elephant 'attraction', bare in mind the torture that the elephant has gone through for your pleasure!!