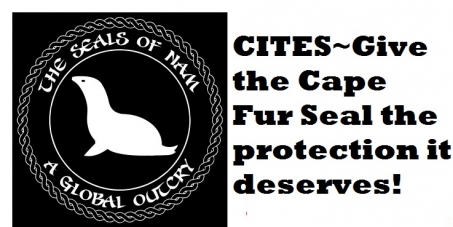 Give the Cape Fur Seal the protection it deserves

By continuing you agree to receive Avaaz emails. Our Privacy Policy will protect your data and explains how it can be used. You can unsubscribe at any time. If you are under 13 years of age in the USA or under 16 in the rest of the world, please get consent from a parent or guardian before proceeding.
This petition has been created by Pat D. and may not represent the views of the Avaaz community.
x

Sign this petition
Pat D.
started this petition to
Mr John Scanlon, CITES Secretary General
In 1972 the Cape Fur Seal was listed on Appendix II of the United Nations Convention on International Trade in Endangered Species.

It is the ONLY species of seal to be found on the African continent. It has suffered a 97% loss of preferred habitat and has barely survived six major mass die offs. Namibian government scientist Dr.JP Roux has confirmed that between 95%-100% of all pups born in 1994 did not survive. In 2004 the Cape Fur Seal suffered the largest mass die off of any marine mammal in recorded history. An estimated 350 thousand animals died.

To make matters worse, the Namibian government slaughters 80 000 nursing pups by beating them to death with pick handles. A further 6 000 adult bulls are shot so that their genitals may be exported to the East, fueling the illegal trade in animal body parts for fake medicines and aphrodisiacs.

In South Africa, the Cape Fur Seal is legally protected under the Seals and Seabirds Protection Act. Namibian ombudsman Adv John Walters has confirmed these seals have NO protection whatsoever in Namibia.

For info on the European Parliament's perspective see http://blogmartinmep.eu/2012/07/30/slaughter-of-namibian-seals-must-be-publicised/

Thank you for your support

The Seals Of Nam

Pat D. needs your help with "Give the Cape Fur Seal the protection it deserves". Join Pat D. and 40,220 supporters today