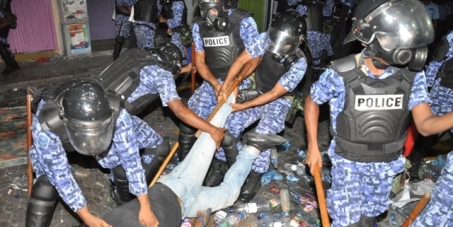 Ensure their rights to the Maldivian people and ensure them fair presidential elections and democratic process.

Last news: on the 7th of October, the Supreme Court cancelled the fist round of the elections, held on the 7th of September. New ballots will be displayed and the people will have to vote again on the 19th of October. 4 of the 7 judges of the Supreme Court decided that the first round had irregularities which are important enough to cancel the first people's choice. If irregularities would be found, we believe that 7 judges and not only four would have choose to cancel it. The most important thing now is to ensure the fresh ballots and their rights to the Maldivian of a fair and transparent elections. The world won't tolerate more violence and threats to the Maldivian people without consequences.

The Maldives welcomes 1 million tourists per year, staying in luxury resorts with their famous beautiful beaches. While they are enjoying their stay in paradise, the Maldivian people are facing a complete different reality. After 30 years of dictatorship, their first democratically elected president has been forced to resign after a mutiny of the police and the army, well organized by former leader and his camp in February 2012. September 7th 2013, the people came back to the ballot boxes to elect their future president while a non-elected president is leading their country. The first run of the elections opposed 4 candidates. Former President Mohamed Nasheed (MDP Party), defender of the democratic process, won the first run with a large and safe advance, but only few percent under the absolute majority. In second place came the leader of the PPM party, half-brother of former President Maumoon Abdul Gayoom who ruled for three decades before the first democratic elections in 2008. Only 3000 votes were missing to the business tycoon Gasim Ibrahim (JP Party), owner of resorts, airport, Airways Company in Maldives to have a ticket for the run-off. The current non-elected President Mohamed Waheed only made a humiliating 5% of the votes.
Saturday 28th September, the run-off would have been between former President Mohamed Nasheed and Abdulla Yamin. However, it was canceled with clear instructions (to the army and the police to stop physically any trial to vote) by the Supreme Court of Maldives. Indeed, Gasim Ibrahim and his party have filed a case at the highest court seeking annulment of the first round alleging vote rigging.
The United Nations, the United States, Britain, India and the European Union have asked Maldivian authorities to complete the presidential polls without delay after observers judged the first round to be fair but the Court or the Government stayed on their position, depriving constitutional right of the Maldivian to vote. Corrupted politics, army and police lost in between the respect of the constitution and the orders of the court, street violence, death threat, etc. the biggest loser of this political parody is the Maldivian people, feared to have to face again a dictatorship in their country while a fragile democracy were just started.
Staffs of resorts have been fired of their workplace because of their candidate’s choice. People are pepper sprayed by the police telling their frustration in the streets of the major islands, while tourists are spending their money on resorts without knowing anything about the current situation or who own the resorts they are staying in – indeed, some Resorts belongs to political Party leaders, forcing them to vote for them.
Today, it is not more ethical and responsible to visit the Maldives and a boycott could be the only way to the Maldivian people to recover their rights soon. After the Avaaz petition asking the Maldivian President Waheed to ensure human rights to be respected after a 15 years old girl has been sentenced to public flogging, it’s time to send a clear message to the Maldivian government and authorities: the only winner of the elections has to be the Maldivian people!

Today: Loic D. is counting on you

Loic D. needs your help with "Ensure their rights to the Maldivian people and ensure them fair presidential elections and democratic process.". Join Loic D. and 2,379 supporters today