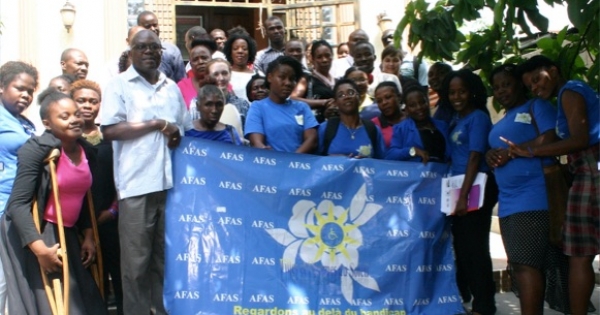 Government of Haiti: Include women with disabilities in the National Gender Equality Policy

By continuing you agree to receive Avaaz emails. Our Privacy Policy will protect your data and explains how it can be used. You can unsubscribe at any time. If you are under 13 years of age in the USA or under 16 in the rest of the world, please get consent from a parent or guardian before proceeding.
This petition has been created by AFAS P. and may not represent the views of the Avaaz community.
x

Sign this petition
AFAS P.
started this petition to
Government of Haiti
Petition for an inclusive approach respecting the equality of women with disabilities in the National Policy for Equality of Women and Men (2014-2034) launched by the Haitian government on 6 March, 2015

We, the signatories of this petition, welcome the launch of the National Policy for Equality of Women and Men (2014-2034) by the government on March 6, 2015. The Haitian government, through this policy, signals that it wants a country where women and men can enjoy equal opportunity to exercise their full rights, and to establish an inclusive Haitian society with strong social cohesion. Despite the nonchalance of the Haitian government in the application of its terms, this policy exists.

The six objectives for this Policy are: equal rights and justice, gender education, access to sexual and reproductive health, measures against violence, economic equality, and equal participation in decision-making bodies. In all of these objectives, women with disabilities are excluded, in violation of their civil
and political rights, as well as their social and economic rights.

The second objective is " For a non-sexist education and egalitarian models ." It is an obligation to include women with disabilities in this objective because the right to education of women and girls with disabilities is not met; they are effectively excluded from education because of inaccessibility, discrimination, harassment and sexual abuse in the education system.

The third objective is " For access to sexual and reproductive health that respects the dignity of women ." This objective again excludes women with disabilities. This is gravely problematic because the right to sexual and reproductive health of women and girls with disabilities is considered taboo, while at the same time, they are subject to sexual abuse and sexual exploitation. Furthermore, they lack access to information and to services that would allow them to better manage their health and protect themselves.

The fourth objective is " For the elimination of all forms of violence against women and girls ." The vulnerable and precarious situation of women with disabilities has not been addressed in this part of the Policy. This is despite the fact that, in reality, they face forms of abuse and exploitation that non-disabled women do not suffer. In addition, the abuse against women with disabilities is condoned as commonplace.

The reality of exclusion and vulnerability of women with disabilities is especially poignant in light of the killing of three deaf women, Jésula Germain, Vanessa Prévil and Monique Vincent. This tragedy highlights the need to include women with disabilities in measures to ensure their inclusion, their protection,
their right to information, and to assure equality between men and women.

We, the undersigned, ask vehemently that this Policy for Equality between Women and Men be revised to take into account the needs of women with disabilities in all these objectives: justice, education, health, measures against violence, work, and participation in decision-making bodies. In addition, it is necessary to change this policy so that the state fulfills its national and international legal obligations.

According to the Haitian Constitution, international treaties, once ratified, are self-executing, and become part of the Haitian Law, abrogating any conflicting pre-existing laws. As this Policy has noted, the Constitution and several international conventions ratified by Haiti recognize equality between women and men and the principle of non-discrimination against women: the Universal Declaration of Human Rights , the International Covenant on Civil and Political Rights and the Convention on the Elimination of all forms of Discrimination Against Women .

Haiti ratified the Convention on the Rights of Persons with
Disabilities (CRPD) on July 23, 2009, and it is part of Haitian Law.
Article 6 of the CRPD provides that " States Parties recognize that women and girls with disabilities are subject to multiple discrimination, and in this regard shall take measures to ensure the full and equal enjoyment by them of all human rights and fundamental freedoms ." Section 4 (c) of the CRPD provides that the State must " take into account the protection and promotion of the human rights of persons with disabilities in all policies and programmes .”