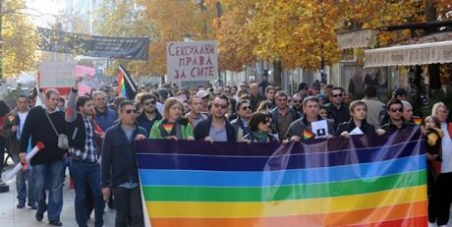 By continuing you agree to receive Avaaz emails. Our Privacy Policy will protect your data and explains how it can be used. You can unsubscribe at any time.
This petition has been created by Dragana D. and may not represent the views of the Avaaz community.

Sign this petition
Dragana D.
started this petition to
Government of Republic of Macedonia, Prime minister Nikola Gruevski
The Government of the Republic of Macedonia has proposed changes to the Constitution including Amendment 33 which defines marriage and civil unions, but also any other form of registered life partnership, exclusively as a union between one man and one
woman. Below is the text of Amendment 33 that regulates marriage, civil unions and any other registered form of life partnership:

On the 7th of July 2014, seven proposed constitutional amendments, including the Amendment XXXIII that was meant to provide for a ‘clearer definition’ of marriage as a union between one man and one woman entered into Parliamentary debate along with the other proposed constitutional amendments. These amendments, however, contained only the definition of marriage as a union between one man and one woman. The definition of
civil union as a union between one man and one woman was not included in the proposal but was nonetheless included in the draft amendments, which was a flagrant violation of the procedure for constitutional changes and an audacious abuse of the decision of the Parliament to proceed with the originally proposed constitutional amendments. On the 27th of August 2014, the seven draft amendments were passed in national Parliament and there, the proposed Amendment XXXIII contained definitions of civil unions, or any other registered forms of life partnership as life unions solely between one woman and one man. We are deeply concerned about LGBTI rights in Macedonia for there are numerous instances of human rights violations and absence of effective protection and persecution by the state authorities. Therefore we believe that this change will only enhance discrimination, violence, and hate speech
toward the LGBTI community. The exclusive constitutional definition of marriage, civil unions, and any other form of registered partnership is discriminatory toward LGBTI people by restricting their right to family life and all the civil and social rights arising from it.
This presents a danger to the development of human rights in Europe, because it is a model that can easily be later applied in other national contexts. To be more specific, the constitutional restriction of international human rights standards is not regulated equally among states in Europe. Those countries that claim supremacy of domestic constitutional law over international law can impose constitutional restrictions that are not aligned with international human rights law and standards, and in the same time are superior in the national legal system. In return, this can make the reaction of the International community much more difficult and much less fruitful.
We call for and encourage all our international friends, human rights and democracy advocates to demand from the Macedonian Parliament, President and Government not to support Amendment 33 of the constitutional changes. Also, we call for and encourage all
our partners to inform their respective Governments of the violations that this Amendment can impose on the right to family life, and the consequences it can have in other national contexts.

Today: Dragana D. is counting on you