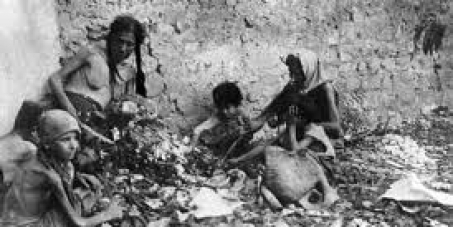 By continuing you agree to receive Avaaz emails. Our Privacy Policy will protect your data and explains how it can be used. You can unsubscribe at any time. If you are under 13 years of age in the USA or under 16 in the rest of the world, please get consent from a parent or guardian before proceeding.
This petition has been created by Carmen B. and may not represent the views of the Avaaz community.
x

TAKE IMMEDIATE STAND FOR THE INTERNATIONAL RECOGNITION OF THE ARMENIAN GENOCIDE

There are so many causes in our world you feel you need to raise your voice for or against. One more? We think so. Otherwise the shadows of the past will be darkening tomorrow´s sunrise. For so many of us.

100 years have passed since the partially unrecognized, partially forgotten genocide of the Armenian people. The dawn of the Otoman Empire at the beginning of the 20th century meant the deportation of more than one million Armenians and the bloody massacre of hundreds of thousands of men, women and children. When bringing up the question of the Armenian genocide, the fact that about one million people have been slaughtered is still contested by skeptics and those obsessed with statistical accuracy.

Let me ask you this: does the accuracy of the victims' numbers, the people deported, tortured, raped, orphaned and killed, make any difference? What if there where „only“ a couple of hundred thousands? Can ethnic cleansing be judged in such a cynical quantitative manner? Can someone clearly conscious tell millions of Armenians spread around the world who lost their loved ones that their suffering can`t be recognised because not enough of them have been killed? Can any responsable gouvernment in the third millenium refuse moral reparation for a traumatised collectivity based on political, economical, statistical or simply ideological judgements?

"Genocide is the worst crime under international law, and any attempt to hide it or deny its existence must be looked upon as a serious infringement of human rights, derogating from the rights of peoples to their history, their memory, their dignity and their right to moral restitution.“ This statement has been made exactly 30 years ago in the UN Report on Genocide.

Well, until now, only 23 countries around the world recognized the Armenian Genocide. Erdogan, the president of Turkey, offered in April 2014 condoleances to the grandchildren of Armenians killed in World War I. (http://uk.reuters.com/article/2014/04/23/uk-turkey-armenia-erdogan-idUKBREA3M0X(P20140423).

This statement deserves only one reply:
Get serious, Mr. Erdogan! The Armenians did not die because of World War I and „condoleances“(?!) can be offered to the „grandchilden“ of one of your personal friends, not to the Armenian people! Take a week end off your presidential tasks and take a look at this:
http://www.unitedhumanrights.org/genocide/armenian_genocide.htm

We are not Armenians, we don`t represent any group, particular person or interest, we are just common citizens who always profoundly disliked injustice, moral duplicity, intolerance and the last consequence of it: man slaughter!
And through AVAAZ we learned that a voice can always make the difference.


OPEN LETTER ON ARMENIAN GENOCIDE Yerevan, April 24th 2015
In my entire life, it so happened that I had affines, schoolmates and many dear friends from the Armenian community. I came to know their lifestyle, too little unfortunately about their culture and almost nothing about the Armenian Genocide.
Until 5 years ago when I read THE BOOK OF WHISPERS, the saga of the Armenian Genocide, a literary masterpiece and in my opinion the best novel of Romanian contemporary literature. THE BOOK OF WHISPERS is also quite an unique performance as it has been translated into 20 languages and already published in 17, in not even 5 years after first Romanian edition.
What impressed me most in this novel about the Armenian Genocide are those most terrying, horrible, heartbreaking, unconceivable stories of the long road of deportation, starvation, rapes of girls and boys, executions and deaths of millions of Armenians, described in an amazing, somehow soft and very poetic style, as if the author intended to protect me, the reader, from a too great suffering...! There is no shouting out loud, no yelling, no desperate crying over the Genocide, just circling waves whispering in an ocean of unbelievable life and death stories.
It was then, after reading the BOOK OF WHISPERS and doing some research on the Armenian Genocide that I realized that if victims and descendants and Armenians generally as a traumatised community mostly whisper their story, it is us, the others, the NON ARMENIANS who have to raise the voice and spread the word to the world.

I initiated a petition on the renowned international civic platform AVAAZ which – by the way - means "voice" in several European, Middle Eastern and Asian languages and I am grateful to a couple of thousands NON Armenians and Armenians who already signed this petition adressed to governments worldwide and the UN General Assembly urging it to declare the 24th of April Armenian Genocide remembrance day. Among all the other international days.. of missing crew members, of the radio, of migrating birds or jazz – to give only a few examples that make you wonder! - there must be some not already taken place to comemmorate the first genocide in history! 2015 is a symbolic moment and about high time!!!
But the reason why I asked for a few minutes of this precious time we are all sharing is mainly another than telling you the story of a humble private initative:
I am here and now to demand that the Parliament of Romania adopts the resolution for the official and full recognition of the Armenian Genocide. Despite any economic or political considerations concearning third parties denying it! I think I am quite realistic when I wonder what other consequences that recognition would have for Romania, other than an ambassador recalled to headquarters for consultations and a couple of statements and articles expressing disappointment in some countries` mainstream media!
But above all I am here and now to ask Klaus Johannis, the president of Romania, he himself a declared member of an ethnic minority and a different religious cult than the majority in Romania, who has been elected recently by the majority and therefor also represents quite a premiere on the European political arena, to take immediate steps for consultations with all political parties represented in the Parliament and urge them to adopt the resolution in favor of recognition of the Armenan Genocide.
Mr. President, you have to do that for the Armenian community in Romania and for all those Romanians having signed the petition for this recognition. You were not living in Buchrest by that time, Mr. President Klaus Johannis, but I can tell you this very true story:
In december 1989, inmidst of the Romanian anti - communist revolution, when people where shot to death by the troops of the Army and of the feared Securitate, the Romanian secret police, radio Free Europe send a message urging priesters to ring the church bells as a sign of change and hope and standing by those fighting in the streets.
And I here and now, Mr. Klaus Johannis, President of Romania, Sir, I tell you that the only church ringing the bells in a big areal in the city center, was the Armenian Church. And guess what? In the tower, by the bells, the Armenians have not hesitated letting their youngsters do that. I can still see them and I can still hear the bells.
DO YOU?...
Carmen Bendovski

Today: Carmen B. is counting on you