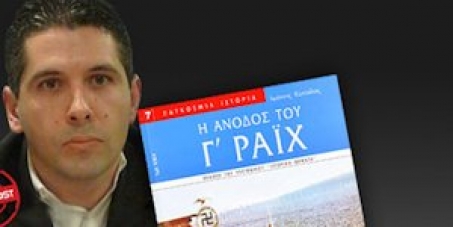 Greece: No say on immigration issues for Nazi-revisionist Ioannis Kotoulas

By continuing you agree to receive Avaaz emails. Our Privacy Policy will protect your data and explains how it can be used. You can unsubscribe at any time. If you are under 13 years of age in the USA or under 16 in the rest of the world, please get consent from a parent or guardian before proceeding.
This petition has been created by Maria P. and may not represent the views of the Avaaz community.
x

We - the undersigned - are deeply concerned with the recent appointment of Dr I Kotoulas as government adviser on Immigration & Nationality issues.

Ioannis Kotoulas - a historian, teacher and Nazi revisionist - has been newly appointed as the chief adviser on immigration and nationality issues to the Minister of Internal Affairs, Mr Charalambos Athanasiou.
Kotoulas, has penned several books and articles which seek to restore the image of Nazism in the public imagination. In his ‘The Ascent of the 3rd Reich’ he claims that: “In order to enable the better understanding of a complicated phenomenon such as National Socialism... the approach has to be underpinned by sobriety”. By ‘sobriety’, Kotoulas mainly refers to building a positive image about Nazism. In his work, the writer has chosen, as he explains, to use the term ‘National Socialism’ rather than use the term ‘Nazism’, and similarly, he is using the term NSDAP to refer to the Nazi party. Even at the level of visual imagery, the book is full of propaganda photographs highlighting the positive aspects of the Nazis. For the most part, Kotoulas lists positive or, at best, neutral opinions about Nazis, and avoids talking about the war crimes that had been committed by the Axis Powers. In cases where a reference to such crimes is made, as for example in his book War Crimes of the Axis Powers, Kotoulas is careful to point out that war crimes were committed by both conflicting parties, even in cases where the party had been an invaded country acting in self-defence such as Greece. Throughout his book he tries to undermine the importance of WWII and the people’s struggle against fascism by presenting it as ‘another war’. Kotoulas even goes as far as to claim that the concentration camps were standard practice among both the Axis Powers and the Allied Powers, and referring to the genocide of the Greece’s Jewish communities as ‘relocation’! In that book he states that: “On the 15th of March the first 2,400 people were relocated to the Auschwitz concentration camps. Eighteen more missions followed... A large part of the Jewish people who were relocated to the concentration camps passed away.” It is worth noting here that about 90% of the Greek Jewish community was exterminated as a result of this ‘relocation’.

Firstly, it is astounding that the Prime Minister failed to ensure that the appointment of advisers to his coalition government was subject to the most thorough scrutiny that would have eliminated the risk of his tenure being associated with such personalities. This leaves us to conclude that, at best, he has been grossly negligent in executing his duties to Greek society, or, at worst, entirely indifferent to concerns about the government’s overtures to these fascist remnants. At present, however, the Prime Minister cannot feign ignorance about Kotoulas’s widely publicized and highly controversial views. Although Kotoulas’s appointment has been questioned by SYRIZA, PASOK and the Democratic Left the Prime Minister has yet to respond. This is not an isolated incident but the symbolic escalation of a tolerant, if not positive stance of the Coalition Government with regards to the Far-Right and its pro-Nazi part.

In the light of the above, we call upon the Coalition Government to remove Kotoulas from post, and to ensure that all appointments to such positions are scrutinised thoroughly so that such unforgivable concessions to latter-day Nazi apologists are not repeated. These people have no place in a government that wants to call itself democratic.

Other related links (unfortunately all of them in greek):

Today: Maria P. is counting on you