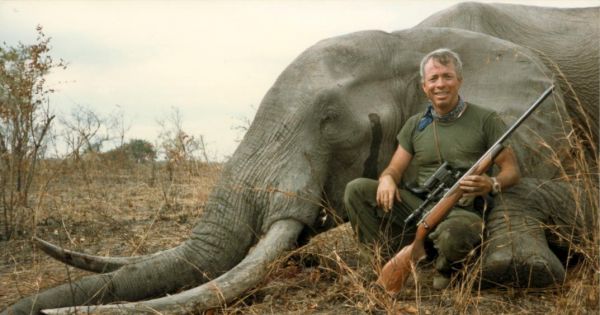 Expel Trophy Hunters from the IUCN

On September 27, 2019, IUCN published a report from its Ethics Specialist Group - a global network of practitioners and scholars - entitled ‘Compatibility of Trophy Hunting as a Form of Sustainable Use with IUCN’s Objectives’.

On October 3, 2019, the report was mysteriously removed from IUCN’s website after the Campaign to Ban Trophy Hunting published extracts of the report on social media and members of the press started contacting IUCN about it.

The Campaign to Ban Trophy Hunting was, however, able to download the report in full before it was censored.

The report goes on to say that trophy hunting organisations should not be allowed to be members of IUCN as their goals are contrary to IUCN’s mission and that allowing them to continue as members undermines IUCN’s credibility: “The critical question is whether trophy hunting as it is practiced by individuals and promoted by certain hunting organizations may be consistent with IUCN’s general objectives as expressed in Articles 2 and 7. This is clearly not the case.

“Any other view would threaten IUCN’s credibility for providing moral and ethical leadership in conservation policies. It would certainly undermine the many efforts of IUCN members to promote a just and sustainable world.”

• Dallas Safari Club’s mission is “Protecting Hunters’ Rights: Advocacy is a part of DSC’s mission. DSC and DSC-PAC have been very successful in defeating legislation that would have severely curtailed hunting rights.” It adds: “Your contributions to DSC-PAC go directly to efforts that support and help elect pro-hunting, pro-Second Amendment candidates at the federal and state levels.”
• Safari Club International claims to have spent $140 million since 2000 “protecting the freedom to hunt through policy advocacy, litigation and education for federal and state legislators to ensure hunting is protected for future generations.”
• ‘Conservation Force’ was set up by John J Jackson III, a Louisiana lawyer, “lifetime sportsman” and former President of Safari Club International. According to Conservation Force’s website, the group has filed over a dozen ESA ‘down-listing’ petitions – designed to relax restrictions on hunting of threatened species - and filed or intervened in over a dozen ESA-CITES federal court suits. It claims to have had a string of successes against restrictions on trophy hunting and trophy imports, including a lawsuit that re-established hunting import permits for endangered Zambian elephants, and a successful campaign to ‘downlist’ the conservation status of the endangered Canadian Wood Bison.

Other successes claimed by Conservation Force include a campaign to import leopard trophies from Mozambique, where the animal is highly endangered; overturning the closure of trophy hunting in Costa Rica; defeating multiple efforts to stop white rhino hunting; leading a campaign to issue permits for the import of horn from darted black rhinos; and defeating a lawsuit brought by environmental groups to list the Argali as endangered and halting imports of its trophies into the US. Conservation Force has been in the forefront of efforts to allow the import of cheetah trophies into the US.

It sued Delta Airways for refusing to ship the trophy of a critically endangered black rhino that had been auctioned off at a safari club convention for $350,000. It also took the state of New Jersey to court when it introduced a law banning hunting trophies from endangered animals coming through its air and sea-ports.

John Jackson, Conservation Force’s founder and Chairman, is himself an avid hunter. He has been on at least 44 hunting safaris in Africa. He has reportedly been on 38 elephant hunts and killed 14 elephants. He once wrote: “Nothing has been so consistently fulfilling to me as my hunting. It has stirred an insatiable appetite for more. Without it I would somehow be incomplete. My trophy room has memorabilia of the sights, sounds, smells, and highlights of those adventures in the scenic savannas, tangled forests, and cathedral-like mountains of the world. I can plainly see the African lion that has leaped into the air the moment its head snaps backward and explodes with smoke from my bullet.” (From: “Great Hunters – Their Trophy Rooms & Collections”, Safari Press, 1997)

Today: Siobhan M. is counting on you