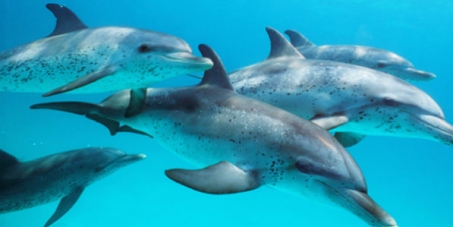 HELP END THE CRUEL CAPTURES OF WILD DOLPHINS FOR CAPTIVITY!

By continuing you agree to receive Avaaz emails. Our Privacy Policy will protect your data and explains how it can be used. You can unsubscribe at any time. If you are under 13 years of age in the USA or under 16 in the rest of the world, please get consent from a parent or guardian before proceeding.
This petition has been created by Laura B. and may not represent the views of the Avaaz community.
x

Sign this petition
Laura B.
started this petition to
The Hon. Rebecca M. Blank, Deputy Secretary of Commerce; The Hon. John Kerry, Secretary of State
In the United States, there have been no imports of wild dolphins for incarceration into theme parks for twenty years. Under the federal Marine Mammal Protection Act (MMPA) of 1972, such captures must be humane. But several theme parks are working to get around these restrictions.
The Georgia Aquarium, on behalf of itself and five other theme parks, is proposing the import of 18 wild beluga whales caught in Russia. Because the beluga whales were caught over the past few years, the Georgia Aquarium is arguing that they are “captives” rather than wild. Furthermore, the Georgia Aquarium asserts the beluga whales were caught humanely, but offers no proof. Of 71 beluga whales these six theme parks have held in captivity, 34 (48%) are dead.
Additionally, SeaWorld is proposing to import a Pacific white-sided dolphin from an aquarium in Japan, claiming the dolphin was born in captivity. But the sources of the Japan captive dolphin industry are the dolphin drive hunts and slaughters in Taiji and other ports. If indeed born in captivity, the dolphin was most likely born of parents separated from their families during a drive hunt, with most or all the subsequent family members slaughtered.
Please ask the Obama Administration – the acting Secretary of Commerce and Secretary of State – to block these attempts to circumvent the law and to permanently end the imports of dolphins and whales for captivity. The captivity industry, interested only in making money off of dolphin shows that provide no educational benefit to the public, contrary to the MMPA, should not be allowed to twist the MMPA provisions around by “laundering” wild dolphins through schemes like claiming the dolphins were caught humanely, with no proof, importing offspring of inhumanely-caught dolphins, and buying “captive” dolphins from dolphin traffickers.

Thank you for your support for the dolphins!
For further information on dolphin trafficking and captivity, go to http://www.DolphinProject.org.

Today: Laura B. is counting on you

Laura B. needs your help with "HELP END THE CRUEL CAPTURES OF WILD DOLPHINS FOR CAPTIVITY!". Join Laura B. and 14,320 supporters today