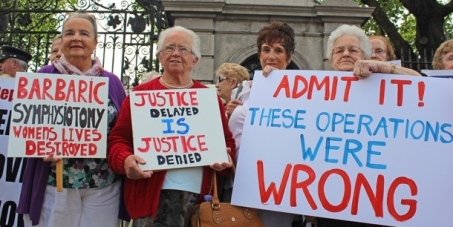 Justice for Irish Victims of Torture

By continuing you agree to receive Avaaz emails. Our Privacy Policy will protect your data and explains how it can be used. You can unsubscribe at any time.
This petition has been created by Marie O. and may not represent the views of the Avaaz community.

Sign this petition
Marie O.
started this petition to
Health Minister Leo Varadkar
Doctors were supposed to deliver my baby safely. Instead they delivered me a lifetime of pain -- and now the government’s trying to deny me and hundreds of other women justice. Will you join our call?

When my labour got complicated, the doctor refused to do a C-section: instead he broke my pelvis while I was wide awake. I left hospital unable to walk, not knowing what had happened to me - as did some 1,500 women and girls across Ireland. Decades later I still can’t walk, and I still have nightmares. But now there’s a chance to end them.

The UN’s just ruled that this was torture - but the government’s planning to offer us an insulting redress scheme, claiming our treatment was “appropriate”. We urgently need your help to vanquish this outrageous lie.The government will finalise the scheme in weeks but if we launch a massive wave of outrage now we can shame Health Minister Leo Varadkar into offering us proper restitution. Sign the petition then share with everyone.

Today: Marie O. is counting on you