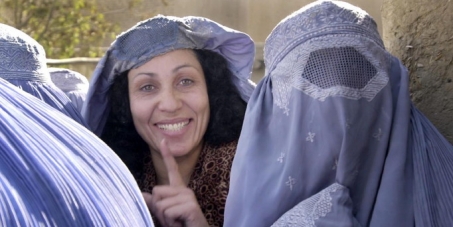 By continuing you agree to receive Avaaz emails. Our Privacy Policy will protect your data and explains how it can be used. You can unsubscribe at any time. If you are under 13 years of age in the USA or under 16 in the rest of the world, please get consent from a parent or guardian before proceeding.
This petition has been created by IAH E. and may not represent the views of the Avaaz community.
x

But reality shows us that Afghan women that have the courage to participate in public life are often exposed to nasty slurs, violent assaults and even death threats and assassinations. Just in the past few years, dozens of Afghan women who have dared to step into the public sphere got murdered. Among them were journalists, politicians, women's rights activists, parliamentarians, teachers, school directors and artists.

Especially those women who work for the interests and rights of women are exposed to these problems. On December 10th 2012, the head of the women's section of the province Laghman, Nadjia Sediqi, was shot in the morning on her way to work. Five months earlier her predecessor, Hanifa Safi, was killed in a bomb attack.

As a united front, we want to show our full commitment against the current conditions of Afghan women’s fate and bring this controversial issue to public attention. With your vote you enable the responsible authorities to take action , so that the sacrifices that women of Afghanistan make are not in vain.

Afghanistan is in the middle of carving a new society structure.

Support women with your signature to fulfill their responsibility for the Afghan society!

Today: IAH E. is counting on you