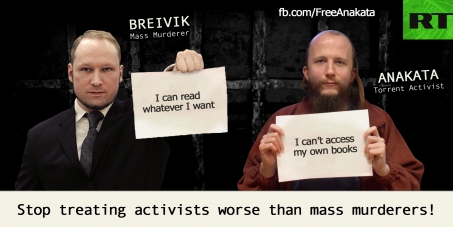 Helle Thorning-Schmidt, Prime minister of Danish Government: Pardon and release Anakata, but even more urgently, provide him with books.

By continuing you agree to receive Avaaz emails. Our Privacy Policy will protect your data and explains how it can be used. You can unsubscribe at any time. If you are under 13 years of age in the USA or under 16 in the rest of the world, please get consent from a parent or guardian before proceeding.
This petition has been created by Meelis K. and may not represent the views of the Avaaz community.
x

Our previous petition at Avaaz Community Petition to Swedish Minister of Foreign Affairs, has gathered over 400 signatories, but has not lead to any kind of response. Anakata is still held captive in unbearable conditions, without even charges been pressed against him.

So what is our need and motivation to launch another petition campaign?

While the Swedish upper level court dropped charges related to the Nordea hacking, and reduced his overall sentence to half on 25th of September 2013, so that Anakata should be freed by now, he was nevertheless extradited to Denmark, and is now locked up in high security prison under constant surveillance, while reduced to bare minimum, almost no outside contact. Even his Mother cannot visit him during the Holiday Season, since there are not enough guards for that. His total contact with other inmates cannot exceed 9 hours a week.

During his incarceration in Sweden Anakata began to take some advanced mathematical courses in order to increase his education and to give him something to do during his detention there.

As of now, prison authorities have left him without access to any type of reading material. He is not allowed have newspapers, magazines, books that are in the prison library, or his books that were brought from Sweden with him during extradition. Since his arrival he has received no letters, only a handful of postcards.

The prison services excuse all of this by saying that they are worried about anakata ruining the evidence that they have not even found yet, that he could find out sensitive information through reading the paper/magazines or letters.

With only 9 hours a week of contact outside of his isolation cell, reading and educational materials are important for anakata. He is a computer genius and it is important for not only mental but physical health to keep a mind active.

Please sign the petition asking the Ministry of Justice in Denmark to override the restriction for reading/educational materials on inmate #171084, Gottfrid Svartholm Warg, aka anakata.

Thank you, but that is not the End.

Check out and Join the online Movement:

And Do even more!

Bypass all the bottlenecks and directly get in touch with Helle, Prime Minister of Danish Government.


Thank you for your effort

Today: Meelis K. is counting on you