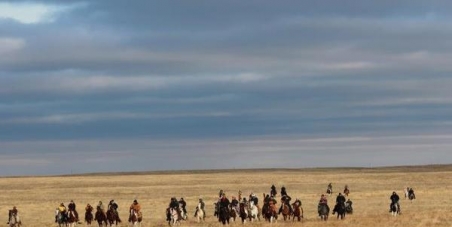 Help the Lakota Sioux Save their Sacred Black Hills Land!

By continuing you agree to receive Avaaz emails. Our Privacy Policy will protect your data and explains how it can be used. You can unsubscribe at any time. If you are under 13 years of age in the USA or under 16 in the rest of the world, please get consent from a parent or guardian before proceeding.
This petition has been created by Sara J. and may not represent the views of the Avaaz community.
x

Sign this petition
Sara J.
started this petition to
President Barack Obama, United States;, Ken Salazar, Secretary, Department of the Interior, Dennis Daugaard, Governor, South Dakota, John Thune, Senator, South Dakota, Tim Johnson, Senator, South Dakota, Kristi Noem, U.S. Representative, South Dakota
Saturday August 25, 2012. UPDATE : Good news! The auction was cancelled at the last minute, and it's clear public pressure played a role. But the land is still publicly listed for sale, and Pe 'Sla is still in danger of being sold off and developed. The Lakota Sioux tribes continue to ask as many people across the US and around the world to stand in solidarity, and demand the US government collaborate on a long-term solution for protecting this sacred place.

August 14, 2012. Pe' Sla is an area in the Black Hills of South Dakota (just west of Rapid City, South Dakota, United States) that is considered by the Lakota Sioux people to be the Center and heart of everything that is. It is part of our creation story, a sacred place . We perform certain ceremonies at Pe' Sla which sustain the Lakota way of life and keep the universe in harmony. Almost 2,000 acres of Pe' Sla is privately owned and could be auctioned off on August 26, 2012 to the highest bidder .

The seven bands of the Lakota/Dakota/Nakota Oyate (people) aka Oceti Sakowin (Great Sioux Nation) have a collective effort to buy as much of Pe'Sla as we can at this auction (although we also believe that the land cannot be owned and that our sacred places were illegally taken by the United States). Yet we are trying to work within the current U.S. laws to regain custody of our sacred sites and prevent future road and industrial development .

Our sacred ways must be protected and passed on to our future generations so that our children may live. This area of the Paha Sapa (Black Hills) is also home to many plants and animals who should also be protected. In fact, many consider that the area should possibly be a historical site, which would also assist in protecting it from future development as well. As Lakota people, our ancestors prayed here, at Pe' Sla, at certain times of year, when the stars aligned. We cannot go elsewhere to pray. We were meant to pray here.

We have a group of young professional Native people that are dedicated to the promotion of education, health, leadership, and sovereignity among our indigenous Nations. Our goal is to assist in any way possible the purchase of Pe' Sla by a collective effort of the seven bands of the Oceti Sakowin (Great Sioux Nation) - the Lakota/Dakota/Nakota people. All proceeds from this campaign will go towards that effort. This area would be open to tribal nations for ceremonial purposes. The plants, animals, water, and air in the area would be respected and honored.

We are hoping to buy as much of the land that is being put up for auction as possible. The total amount of land is 1,942.66 acres which is in 5 tracts (300 - 440 acres each). It is diffcult to say how much this land would be sold for as developers may increase the true western "value". The Rosebud Sioux Tribe has designated $50,000 for the purpose of purchasing Pe' Sla land. By contributing to the effort of all the Sioux Tribes, we aim to purchase at least some of the tracts, if not all. Many of the Sioux Tribes continue to exist in poverty and do not have a thriving casino-based economy as the media may have portrayed. Yet we continue to fight for what is sacred, because it matters!

Update: On August 24, 2012 the auction of the Reynold's Prairie portion of Pe' Sla was cancelled at the owner's request. This land is for sale and the Oceti Sakowin hope to purchase it and preserve it for future generations.

"Let us put our minds together and see what life we can make for our children." Chief Sitting Bull, 1877

Today: Sara J. is counting on you