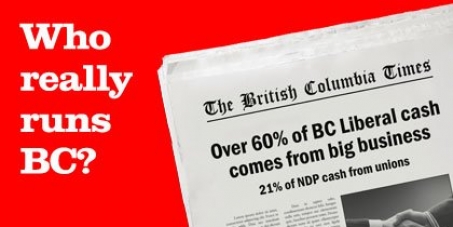 By continuing you agree to receive Avaaz emails. Our Privacy Policy will protect your data and explains how it can be used. You can unsubscribe at any time. If you are under 13 years of age in the USA or under 16 in the rest of the world, please get consent from a parent or guardian before proceeding.
This petition has been created by brad S. and may not represent the views of the Avaaz community.
x

Sign this petition
brad S.
started this petition to
Government of British Columbia
BC’s political parties are raking in the cash, but at what price?

The head of a BC charity that made $3,370 in prohibited political donations to the BC Liberals recently made a startling admission:

"It’s a cost-effective, time-effective way to interact with the people in the government. That’s the way the system works.”

Sadly,he’s not the only one who believes the same thing in BC.

In a democracy, elections are meant to enable all individuals to voice their concerns and elect MLAs who will listen and do the right thing.But in BC elections, it seems like money talks and that the only ones being heard are those with the most cash.

This is not how BC's democracy is supposed to work and it has to stop.

It’s why IntegrityBC is asking you to sign our petition and put as much pressure as possible on the BC government to change the way politics is run in this province for good. It’s time to:

The bottom line: If you can't vote in a BC election, you have no business donating.And if you can vote the size of your donation shouldn’t make your voice louder than everyone else’s. The only strings attached to donations ought to be to BC voters, not BC boardrooms.

Let’s address BC’s democratic deficit now .Please sign this petition and share it with everyone you know!

Please sign this petition only if you live in British Columbia.

Today: brad S. is counting on you