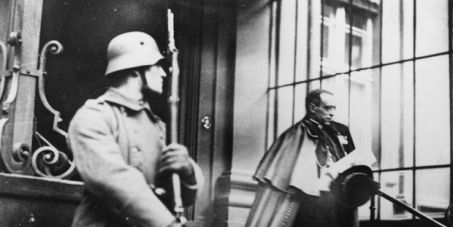 His Holiness, Pope Francis: Time to Release the Secrets of the Vatican Bank’s Wartime Files

By continuing you agree to receive Avaaz emails. Our Privacy Policy will protect your data and explains how it can be used. You can unsubscribe at any time. If you are under 13 years of age in the USA or under 16 in the rest of the world, please get consent from a parent or guardian before proceeding.
This petition has been created by Gerald P. and may not represent the views of the Avaaz community.
x

Sign this petition
Gerald P.
started this petition to
His Holiness, Pope Francis
The Vatican Bank –founded in the middle of World War II– has been accused at times of being a co-conspirator in complex international banking frauds, and serving as a safehaven for the mega-rich to evade taxes, Italian politicians to keep secret slush funds, and the mafia to launder illegal money.

After the war, U.S. counterintelligence tracked looted gold from the national treasury of Croatia to the very gates of St. Peters . At that point the trail to the gold vanishes.

The documents about the bank’s wartime role are sealed inside the Secret Archives of the Vatican. The Vatican Bank has only one shareholder: the Pope. Because of that, with a single decree, the Pope can open the bank’s World War II files. By ordering the release of its Holocaust-era files, Pope Francis can provide answers to troubling questions about the bank’s wartime profits and its postwar role as a possible depository for Nazi gold. The truth is long overdue.

Today: Gerald P. is counting on you