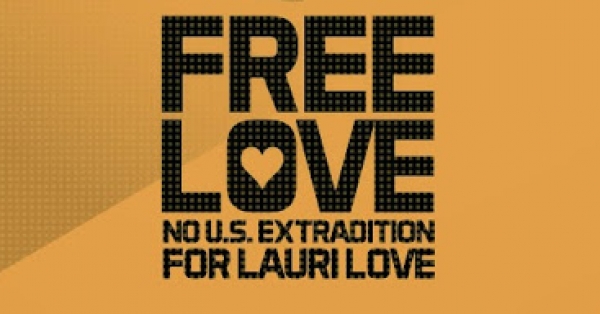 Home Secretary Theresa May : Allow activist Lauri Love to have his case heard in the UK

By continuing you agree to receive Avaaz emails. Our Privacy Policy will protect your data and explains how it can be used. You can unsubscribe at any time. If you are under 13 years of age in the USA or under 16 in the rest of the world, please get consent from a parent or guardian before proceeding.
This petition has been created by Samantha C. and may not represent the views of the Avaaz community.
x

Sign this petition
Samantha C.
started this petition to
Home Secretary Theresa May
Lauri Love is a dedicated UK activist for human rights, free speech and justice. He has fought tirelessly for a number of causes and stood in solidarity as a friend and a comrade to many. Now is the time to return the favour, as he faces extradition to the U.S. It is essential at this stage that there is a movement against all attempts to extradite him from the UK to be tried in the country with the most to answer for on an international scale for spying and illegal surveillance. Lauri is a British citizen and he deserves a fair trial in the UK. You can find out more about Lauri's case at https://www.freelauri.com

"Lauri is adamant he will not come to the US to be prosecuted. One need only look to the cases of whistleblowers and activists such as Jeremy Hammond, Barrett Brown, Aaron Swartz and Chelsea Manning to know the US legal system is not about justice, but about retribution. Lauri is also concerned about the extensive use of solitary confinement as punishment in the US legal system. The prolonged use of solitary confinement has been ruled torture by every major human rights group, and yet is still used as a routine form of punishment for even the most minor infractions without concern for the mental health of the prisoner. It is clear from recent examples that there is no potential for anything remotely resembling justice to come from an extradition order to the US in a case such as this." -- freelauri.com

"I'd much rather exude hugs and understanding and sympathy and love but there is a lot we have to be angry about. Not angry towards people, even if it's convenient rhetorically to hang our barbs on the agents of injustice. In fact we must always be intolerant of the injustice itself, while remaining compassionate and understanding towards those who find themselves wrapped up in its application and implementation." -- Lauri Love

Somerset Bean, graphic design for justice made some wonderful posters in PDF and printable format. --http://somersetbean.blogspot.com.au/2013/11/free-love-posters-no-us-extradition-for.html