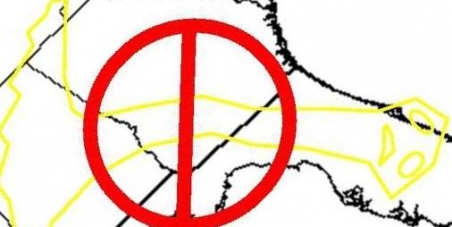 By continuing you agree to receive Avaaz emails. Our Privacy Policy will protect your data and explains how it can be used. You can unsubscribe at any time.
This petition has been created by Debra J. and may not represent the views of the Avaaz community.


Sabal Trail wants a 36-inch pipeline on a 100-foot right of way to be owned by Spectra Energy, NextEra, and Duke Energy gouged 500 miles from Alabama, through Georgia and Florida to power plants owned by FPL (NextEra) and Duke Energy, who are all invested in the natural gas fracking and exporting business. There are export terminals already permitted and waiting in Florida to export LNG to other countries.

By Sabal Trail's own figures, twice as much solar power could be produced on the amount of acreage of their pipeline right of way, and solar power is faster to install, cheaper, cleaner, and takes nobody's land. But FPL is invested with parent company NextEra in fracking in Oklahoma and Spectra in shale fracking in Pennsylvania, so of course they are claiming to need their own fracked gas.

Why disrupt and endanger the lives, land, Floridian Aquifer, rivers springs, wetlands and pristine environment of these three states for the profits of a few utility companies? Why step backwards on the path to clean, renewable energy sources by allowing this pipeline and related compressor stations which will leak toxins into the air and groundwater as well as cause possible 'frac outs' leaking drilling fluids into the aquifer as they bore this pipeline under rivers in karst areas determined by USGS?

This pipeline would feed an FPL power plant in Florida for no benefit to citizens of Alabama, Florida or Georgia, while tearing a 100 foot wide right of way through all three states. There’s no excuse for another natural gas pipeline when solar power is cheaper and brings jobs and energy. This can be seen in the great state of Georgia (and others) which have implemented solar energy policies signed by Governors like Governor Deal.

Governor Deal please consider these facts concerning the Sabal Trail pipeline and its parent companies:
Governor Deal, please heed the call of the citizens of Georgia and others across the nation to ban the unnecessary, invasive and dangerous Sabal Trail Pipeline in Georgia as you have done with the Palmetto Pipeline. Again there is no public need or necessity in Georgia or Florida and Alabama for the Sabal Trail pipeline only unnecessary burden upon the citizens and taxpayers.


For more information and other ways you can help: SpectraBusters.org