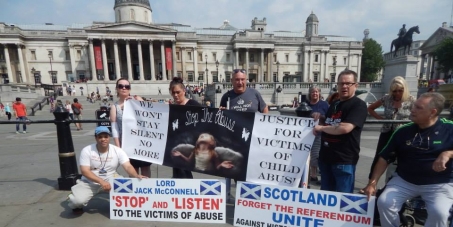 By continuing you agree to receive Avaaz emails. Our Privacy Policy will protect your data and explains how it can be used. You can unsubscribe at any time. If you are under 13 years of age in the USA or under 16 in the rest of the world, please get consent from a parent or guardian before proceeding.
This petition has been created by Rosa M. and may not represent the views of the Avaaz community.
x

UNITED WE STAND AGAINST CHILD ABUSE!!!


On Friday 18th July, 2014 at 11 am GMT, people from across the UK, from various groups, cultures and belief systems Rallied outside the Houses of Parliament to stand together as ONE.

Their purpose – to Stand United against Child Abuse.

The photo above was taken as the Protesters assembled in Trafalgar Square to begin their march to Parliament.

They took their concerns right to the source of the problem and they made their voices heard - loud and clear!!!

Those who follow alternative media where survivors and witnesses of these atrocities can speak freely without fear of reprisals, know the score – they are well aware that elite pedophile rings operate freely and unhindered – are indeed organized by those who pull the strings of the puppets walking the corridors of power

It's no secret to THESE people, and hasn't been for years, that any brave soul attempting to report these appalling happenings will be met by some or all of the following scenarios:

They will not be believed.

Their statements will be taken – and neatly filed away somewhere never to be seen again.

Their files will be 'lost'.

They will be persecuted, sectioned, threatened, physically attacked, families attacked, property damaged, careers and lives ruined, be under constant surveillance, may even be killed – it's all happened before . . . far too often!

If they do get to have their day in court – they are up against a corrupt criminal justice system where top/senior officials in the police force, intelligence services, justice system and parliament have amongst them those who visit the kind of establishments where systematic and sadistic abuse of children consistently takes place – children who have, it is now known, in many instances been taken from 'care homes'. Homes where children in difficult circumstances are placed to be looked after and kept safe?

But this is not just a UK problem – this is a GLOBAL problem!!!

We have to start somewhere though – yes?

Many, many brave and courageous Souls have been working for years to remedy this, some alone, some in groups . . .

Ah but wait?! Since the horrific facts about Jimmy Saville came to Light, it's started to snowball – with more and more unbelievably strong victims/survivors making the decision to come forward:

Yes of course it is – but let's not forget that while the main stream media focuses our attention on a handful of child molesting celebrities – they are deflecting attention away from the monsters in 10 Downing Street, the Judges and high ranking Police Officers, the people in charge of children's services who are both procurers and perpetrators, members of the 'Royal Family' . . . . and on and on and on.

So in the last couple of weeks the national newspapers have started naming names and telling it like it is – to such a degree that the government had no other option but to respond! Under extreme pressure they reluctantly set up yet another 'inquiry'.

Here's why it wasn't good enough:

And because so many of us expressed our outrage in every way we could, this woman was forced to step down as head of this fiasco - so far so good. But they told us, 'someone else would be appointed soon', and,'it would probably be within a few days'. That hasn't happened yet? Why not???

So this is why Brenda Mumsy Mcnamara organized this Rally outside Parliament.

But now we need to keep up the pressure!

We can hold more Rallies and Demonstrations, anywhere, anytime!

We can lobby our own MP's, Government Representatives.

We can raise awareness by signing this petition and continuing to post it all over the Internet.

In the UK, we preside over Glastonbury, felt by many to be the 'Heart Chakra of the World'. We house an old, old establishment still ruled by one of the most powerful financial institutions in the world.

We think that's as good a reason as any to take a stand right here, right now.

If you want YOUR children to be safe – if you want OUR children to be safe – if you want every Beautiful Little Soul across the Globe, even or PARTICULARLY those without families to protect them, to grow up never, ever knowing what 'abuse' means – then open your Heart and help us get at least 500,000 signatures . . . that's what we want to take to give to those who think they're invincible and above the Law – they aren't, and we can do this with YOUR help.

In Peace, Love & Light for the Children of the World!

Today: Rosa M. is counting on you