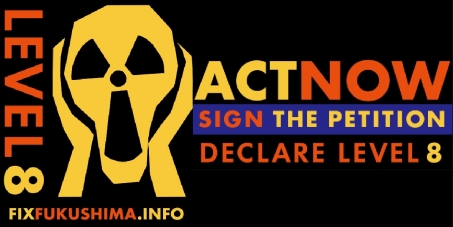 By continuing you agree to receive Avaaz emails. Our Privacy Policy will protect your data and explains how it can be used. You can unsubscribe at any time.
This petition has been created by Dale A. and may not represent the views of the Avaaz community.

We are asking individuals, organizations, and governments in every country to publicly support the urgent call for a newly proposed “Level 8” emergency response to the ongoing crisis at the Fukushima Daiichi nuclear power plant. “We need to act now—to inform and mobilize our communities to demand that local, regional, and national leadership move quickly and gather sufficient resources to initiate and direct an independent, international effort to stabilize, monitor radioactive releases and plumes, and clean up Fukushima. The global environment—and long-term health and safety of every person on the planet, present and future—is at stake.”

The four nuclear reactors devastated by the earthquake and tsunami in March of 2011 continue to pose a grave risk to people and the environment around the entire world. An unprecedented three reactor cores have melted down into (and most likely through) their containment vessels on the east coast of Japan.

After three years of questionable management and oversight by the government of Japan and Tokyo Electric Power Company (TEPCO), enormous quantities of radioactive releases continue to spew daily into the world's ocean from the Fukushima nuclear power facility—with no end in sight.

A new, international “Level 8" category must be added to the International Atomic Energy Agency’s current 7-level scale that characterizes the severity of nuclear accidents. This new “Level 8" would firmly identify the need for an internationally coordinated response to a major nuclear emergency occurring in any country that has been overwhelmed by disaster, has had a multi-unit accident, or has failed to provide the timely expertise and resources necessary to protect neighboring countries and the global environment from a substantial, ongoing or imminent release of radioactive materials.

Please sign the petition and spread the link widely to help mobilize a global response.
http://tinyurl.com/avaaz-DeclareFukushimaLevel8

To learn more about this worldwide campaign, and how you, your family, and your community can publicly support it, visit
http://www.FukushimaResponse.org
or
http://www.FixFukushima.info