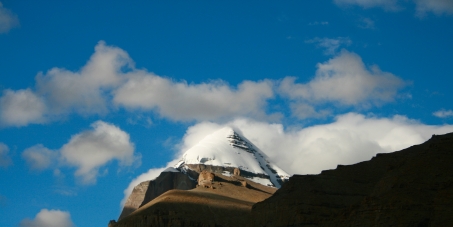 By continuing you agree to receive Avaaz emails. Our Privacy Policy will protect your data and explains how it can be used. You can unsubscribe at any time. If you are under 13 years of age in the USA or under 16 in the rest of the world, please get consent from a parent or guardian before proceeding.
This petition has been created by Augusta T. and may not represent the views of the Avaaz community.
x

Sign this petition
Augusta T.
started this petition to
ICOMOS International Scientific Committee on Twentieth Century Heritage
Mount Kailash, located in the far western Ngari Prefecture of Tibet, is one of the most sacred mountains and pilgrimage sites in the world for Buddhists, Hindus, Bonpo, and Jains. It sits at the core of four of the primary rivers of the Indian subcontinent: the Indus, the Sutlej, the Brahmaputra, and rises to almost 22,000 feet, a lone mountain in the middle of an expansive plain. The pilgrimage route around Mount Kailash's base is 52-kilometers long, and represents a wheel of life. Buddhist pilgrims believe that one circuit around the mountain wipes away the sins of a lifetime; and Hindu, Jain, and Bonpo pilgrims believe that to circle the mountain purifies one's sins. Because pilgrims from these faiths and other cultural and spiritual backgrounds have been traveling to the mountain for centuries, it has become more than a pilgrimage site; it has become a nexus for community cohesion, intercultural exchange, and peace.

Right now, increased tourism and a surge in construction projects threaten the pristine landscape of Kailash. There are plans to build a road around the circumference of the mountain. Not only will this road change the nature of the pilgrimage route and compromise the peace of the pilgrimage path, but it will intensify waste build-up. At present, waste management is almost completely absent at Mount Kailash; red bull cans and coke bottles dot the mountain landscape.

We need to act to protect Mount Kailash from increasing industrialization. We need to keep the mountain landscape pristine to prevent environmental degradation and reduce the negative side-effects of contaminated run-off on vital water sources. By appealing to ICOMOS to issue a Heritage Alert to the Chinese government, on the behalf of Mount Kailash, we can take the first step to ensuring that Kailash continues to serve as a site of pristine natural beauty, peace, and community cohesion into the future.