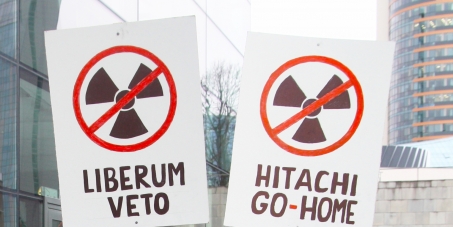 By continuing you agree to receive Avaaz emails. Our Privacy Policy will protect your data and explains how it can be used. You can unsubscribe at any time. If you are under 13 years of age in the USA or under 16 in the rest of the world, please get consent from a parent or guardian before proceeding.
This petition has been created by Lithuanian A. and may not represent the views of the Avaaz community.
x

Sign this petition
Lithuanian A.
started this petition to
The Parliament of the Republic of Lithuania, The President of the Republic of Lithuania
Lithuanian politicians are trying to ignore citizens’ “No” to a new nuclear power plant (NPP), which was clearly expressed in a nation-wide referendum attended by 52,5 percent of voters with 62,6 percent voting against the new NPP on 14 October.

The referendum has caused a headache to Japanese American company “Hitachi-GE” which planned to sell their 5 billion Euros worth reactor to Lithuania after their nuclear projects have been stopped in Japan following the Fukushima disaster. “Hitachi” already declared they will make additional efforts to promote their nuclear business in Lithuania as if they didn’t realize the decision of the referendum.

Lithuanian president Dalia Grybauskaite and the leaders of the major political parties talk about the further development despite the decision of the referendum. Despite the referendum was consultative (deliberative), its decision is legally binding and the Parliament is enforced to act on it by law within one month after the announcement of the results.

The new amendments to pro-nuclear laws are already prepared. We request Lithuanian politicians to accept the decision of the nation and act on it.

Please sign the petition on the right and forward this to everyone you know.

Today: Lithuanian A. is counting on you

Lithuanian A. needs your help with "Implement decision of the referendum against the construction of a new nuclear power plant". Join Lithuanian A. and 468 supporters today