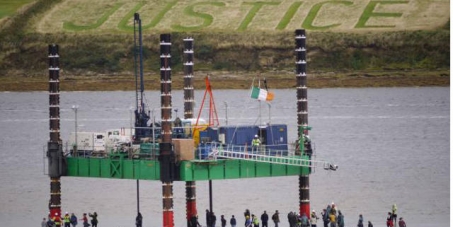 Irish EPA: Don't give Shell a Licence to Pollute!

By continuing you agree to receive Avaaz emails. Our Privacy Policy will protect your data and explains how it can be used. You can unsubscribe at any time. If you are under 13 years of age in the USA or under 16 in the rest of the world, please get consent from a parent or guardian before proceeding.
This petition has been created by ShellToSea .. and may not represent the views of the Avaaz community.
x

Sign this petition
ShellToSea ..
started this petition to
Irish Environmental Protection Agency
For over a decade local residents and solidarity campaigners have been working to stop Shell from developing a dangerous experimental gas project on the west coast of Ireland.

Shell wants to operate an inland refinery running a high pressure raw gas pipeline through the middle of a community in Erris, Co. Mayo.

At a planning hearing into the onshore pipeline route in 2009, Shell consultants admitted that, in the event of a leak, “houses within 230 metres of the pipeline could burn spontaneously from heat radiation ” [i]

The refinery is being built in an elevated peat wetland that drains into Carrowmore lake, the mains water supply for the region’s 10,000 people [ii], many of whom depend on the clean environment to make a living from traditional farming and fishing. The area is also home to dolphins, whales, seals & migratory birds - all at risk from the project.

Shell and the Irish State have been pushing the project through by beating peaceful protestors, jailing farmers who don’t give access to their lands[iii], impounding small fishing boats and prosecuting fishermen who’ve tried to defend their fishing grounds. In June 2009 one of the boats was boarded and sunk in the middle of the night while the crew were held at gunpoint by masked men. [iv]

The state bodies that are supposed to regulate and prevent pollution have not been doing a good job.

EPA Director General Laura Burke has previously stated that the EPA should not be "racing to prosecute" businesses for not complying with environmental licences and regulations . [v]

A recent high court challenge however proved that the EPA granted Shell an Integrated Pollution Prevention and Control (IPPC) licence before undertaking an Environmental Impact Assessment, so the licence was quashed. [vi]

Shell needs a new license to pollute and the Irish EPA have already proposed to grant Shell a new Industrial Emissions Licence to operate the refinery.[vii] It costs €126 to object or €100 to ask for an oral hearing. The Irish State is trying to price out objection - get behind this petition & help local campaigners get value for money! This petition will be active until midnight the 8th of May and then the list of signatures will be sent to the EPA before the deadline.

Right now Shell have boats off the Irish coast trying to re-sink 800 metres of Shell's outflow pipe laid just 5 years ago that recently floated to surface. The EPA response to this was “We don’t consider it necessary to send an inspector to view the pipe at this time”. [vii] With this attitude prevalent we need your help to force the EPA to do their job.

Shell wanted to complete the project by 2003, but a huge effort has held it up until now. Let’s make our voices heard and tell the Irish EPA not to give Shell a licence to pollute, and hold an oral hearing into the application so that objections can be properly heard.

Today: ShellToSea .. is counting on you

ShellToSea .. needs your help with "Irish EPA: Don't give Shell a Licence to Pollute!". Join ShellToSea .. and 1,211 supporters today