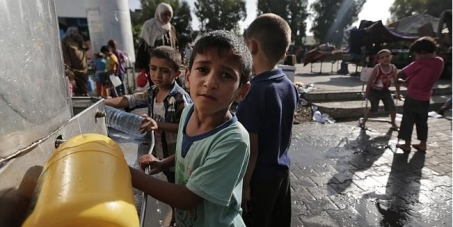 Call to World Governments to Immediately Send AID to GAZA

By continuing you agree to receive Avaaz emails. Our Privacy Policy will protect your data and explains how it can be used. You can unsubscribe at any time. If you are under 13 years of age in the USA or under 16 in the rest of the world, please get consent from a parent or guardian before proceeding.
This petition has been created by Mobeen M. and may not represent the views of the Avaaz community.
x

Gaza on the brink of a major public health crisis.

Not enough supply of Food, clean Water, Sanitation and Shelter for millions of people displaced some of which forced to flee and hide in UN schools that were already over crowded, reached almost unsustainable levels and even not safe any more from Israel's bombardment.

Social and Economic Fabric destroyed - Several Factories destroyed - from food processing to pharmaceuticals, construction material, nothing left standing as if hit by a terrible tsunami. Imagine their chances of employment or means of survival, if they are left any? And we are all accomplice and a witness to this crime by showing silence and turning backs on these poor helpless people.

The lives of ordinary people in Gaza is increasingly made to look like 'Hell on Earth' by having inflicted maximum damage, pain, suffering and collective punishment to the entire population such that ones who survive only find their lives completely shattered and their futures made ever more vulnerable - something close to 'unbearable'.

By signing this petition we are sending a message that we are together in this to help save GAZA.