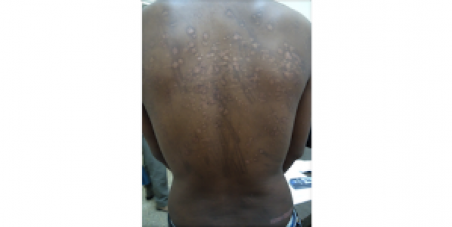 By continuing you agree to receive Avaaz emails. Our Privacy Policy will protect your data and explains how it can be used. You can unsubscribe at any time. If you are under 13 years of age in the USA or under 16 in the rest of the world, please get consent from a parent or guardian before proceeding.
This petition has been created by Maya P. and may not represent the views of the Avaaz community.
x

Sign this petition
Maya P.
started this petition to
Israel's Prime Minister, Ministry of Interior, Ministry of Defense, Ministry of Justice, Ministry of Health
Since June 2012, all African asylum seekers arriving in Israel have been automatically imprisoned without trial, for a minimum of three years. Detainees include those previously trafficked, raped and tortured in the Egyptian Sinai. Israel is the destination country and not responsible for abuse suffered prior to entry, but it nevertheless has obligations as to how it treats these people once they arrive.

Many Asylum Seekers have been kidnapped by gangs from refugee camps in the Sudan, and then brought to camps in Sinai for ransom profits. Joe Stork, deputy director of the Middle East and North African division at Human Rights Watch (HRW) has stated that “thousands of sub-Saharan asylum seekers and migrants attempting to cross the Sinai have fallen victim to abusive traffickers and other criminals.”

Conditions in these camps include being chained up underground, electric shocks and beatings. Women are often subject to systematic rape. Captivity can range from weeks to months depending on the time that the asylum seeker’s family takes to gather the ransom (up to $45,000). Without payment, the asylum seeker may be executed.

If the ransom has been paid, the asylum seeker will likely be left at the Israeli border with the scars of the torture still raw on their body. Israeli law enables automatic detention of anyone who irregularly crosses the border, which includes asylum seekers who enter Israel illegally. This is despite the fact that under international law asylum seekers should not be criminalized for entry.

Yet Israel’s definition of trafficking covers only those who have been exploited for a specific purpose, such as sex or labor. Asylum seekers who have "only" been raped or tortured along the way often do not meet this definition. Israel has no system of rehabilitation specifically for victims of torture, so these victims are left to languish in prison.

There are serious problems with the current system of dealing with victims of torture and trafficking in detention centers. First, there is a lack of identification of victims of trafficking. And even if a victim of is identified, spaces in shelters are extremely limited and therefore often despite identification the victim will remain in prison.

For all 2,000 asylum seekers currently in Saharonim prison, there are only four social workers. The insufficient access to gynecological care results in delays that pose a health risk. In October 2012, Israeli media reported that a Sudanese refugee who was detained did not see a gynecologist on time and as a result, gave birth to a stillborn baby. At times, the delay in access to a gynecologist means that asylum seekers who became pregnant as a result of rape by traffickers are unable to abort the fetus, since their pregnancy has progressed beyond the point when an abortion is possible.

Israel cannot allow victims of torture and trafficking to be left in prison without sufficient medical rehabilitation.

This petition has been posted by Right Now: Advocates for African Asylum Seekers in Israel in partnership with Rene Cassin: The Jewish Voice for Human Rights.

And you can petition the Egyptian government to stop human trafficking and torture in Sinai by signing this petition: www.tinyurl.com/sinaicampaign

Today: Maya P. is counting on you