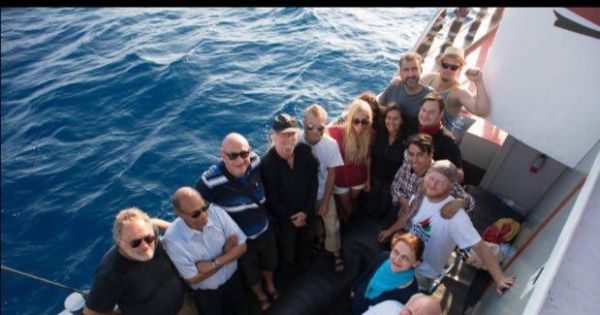 Israeli Government and the International Community: Release the Flotilla activists and let them pass to Gaza

By continuing you agree to receive Avaaz emails. Our Privacy Policy will protect your data and explains how it can be used. You can unsubscribe at any time. If you are under 13 years of age in the USA or under 16 in the rest of the world, please get consent from a parent or guardian before proceeding.
This petition has been created by Ana K. and may not represent the views of the Avaaz community.
x

Sign this petition
Ana K.
started this petition to
Israeli Government and the International Community
The Gaza Strip has been considered an open air prison since 2007, as Israel has had the Palestinians in Gaza under siege now entering its ninth year. In favor of humanity and justice, Freedom Flotilla III has sailed towards Gaza with the purpose of breaking the unfair blockade of 1.8 million civilians, and to demand the right of a coastal city to have a seaport.

This Freedom Flotilla carries on board 47 participants
, among them human rights activists, journalists, artists and political figures representing 17 countries.

The Freedom Flotilla Marianne is a peaceful, humanitarian action which aims to alleviate the suffering of Gaza's inhabitants who have been besieged in the tiny strip for more than eight years and survived through three Israeli assaults, including the destructive attack last summer, which strikes all aspects of life in the strip.

The Flotilla passed through international waters towards the regional waters in the Mediterranean Sea of Gaza strip coast, It didn't cross the Israeli water. Accordingly, the Israeli authorities have no excuse or right to prevent them from passing. Despite that, Israel once again committed an act of state piracy in the Mediterranean and captured Marianne boat while it was in the international water, arrested the activists and prevented them from reaching the next port; Gaza.

Responding to the call of our ethical and humane obligation, we call upon all people of the world to sign this petition, demanding the Israeli government to release those activists urgently and to let the Flotilla peacefully pass to Gaza, as this is a legal action and a humanitarian Commitment. Asking our respective governments to protect their nationals, and put the Israeli government under pressure to let them fulfill their mission. Join us and raise your voice to stop the collective punishment against the people of Gaza. To let Marianne Flotilla succeeds in delivering some basic equipment into the strip to help its residents survive the inhumane and tough conditions resulting of the ongoing Israeli illegal blockade, such as some solar panels as the electricity goes off most of the time, and some medical equipment for the overcrowded hospitals.