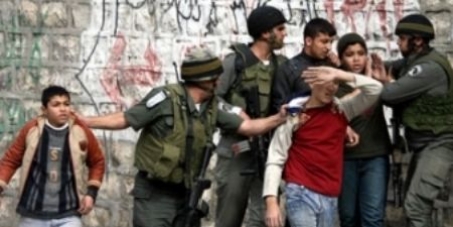 No jail for palestinian babies

This petition is closed
643 Supporters
Claudia E.
started this petition to
Israeli government

In the Occupied Palestinian territory, Israel arrest each year around 700 palestinian children aged 12 to 17. According to the report of the UNICEF, palestinian children are subjects to cruel, inhuman or degrading treatment or punishment in violation of the Convention on the Rights of the Child and the Convention against torture, both signed by Israel. The prohibition of torture and other cruel, inhuman and degrading treatment are also prohibited by customary international law which Israel must respect. This prohibition is anyway universal and absolute. There are no exceptional circumstances in which such treatments are permitted, not even security considerations or the threat of acts endangering the security of State or its population.

Many children are arrested in the middle of the night, awakened at their homes by heavily armed soldiers.

Many of the children arrested at home wake up to the frightening sound of soldiers banging loudly on their front door and shouting instructions for the family to leave the house.

For some of the children, what follows is a chaotic and frightening scene, in which furniture and windows are sometimes broken, accusations and verbal threats are shouted, and family members are forced to stand outside in their night clothes as the accused child is forcibly removed from the home and taken away with vague explanations such as “he is coming with us and we will return him later”, or simply that the child is “wanted”. Few children or parents are informed as to where the child is being taken, why or for how long.

The transfer to the interrogation site

Many children are subjected to ill-treatment during the journey to the interrogation centre. Some endure physical or verbal abuse; some suffer from painful restraints or from being forced to lie on the hard floor of the vehicle. The transfer process can take many hours and often includes intermediate stops at settlements or military bases where further ill-treatment is reported, including in some cases prolonged exposure to the elements and a lack of water, food or toilet facilities.

During these intermediate stops, many children are brought before medical staff and asked a series of general questions about their health. The blindfold is usually removed, but the child’s hands remain tied. Very few children are physically examined. Some children report informing the doctor about their ill-treatment, but there is little evidence that these medical personnel provide medical attention even when the children have marks on their bodies from beatings or from the plastic ties. After this medical interview, which lasts about 10 minutes, the blindfold is replaced before the child is taken outside.

The children are questioned by men dressed in civilian clothes or military uniforms, or sometimes in Israeli police uniforms. No child has been accompanied by a lawyer or family member during the interrogation. The interrogation mixes intimidation, threats and physical violence, with the clear purpose of forcing the child to confess. Children are restrained during the interrogation, in some cases to the chair they are sitting on. This sometimes continues for extended periods of time, resulting in pain to their hands, back and legs. Children have been threatened with death, physical violence, solitary confinement and sexual assault, against themselves or a family member.

Most children confess at the end of the interrogation. The interrogator prints out some forms and orders the child to sign them, though the child often lacks a proper understanding of their contents. In most cases the forms are in Hebrew, which the overwhelming majority of Palestinian children do not understand.

The hearing and the sentence

After the interrogation children are generally brought before a military court for a hearing. Children enter the courtroom in leg chains and shackles, wearing prison uniforms. Most children see their lawyers for the first time when they are brought to the court. Not all lawyers have easy access to the applicable military orders as they are not always made available in Arabic, as is required under international law. Further, some Israeli criminal legislation, which also applies in the military courts, has never been translated into Arabic.

In the majority of cases, the principal evidence against the child is the child’s own confession, in most cases extracted under duress during the interrogation. Sometimes the child is implicated in a confession given by another child. In some cases the children unknowingly sign a ‘confession’, written in Hebrew (which most Palestinian children do not understand), after being advised that ‘confessing’ is their only way out of the military detention system. Although many children reported providing confessions as a result of ill-treatment, few raise this matter before the court for fear that their complaints would lead to harsher sentences, even though international law prohibits the use of evidence obtained under duress by a court.

Ultimately, almost all children plead guilty in order to reduce the length of their pre- trial detention. Pleading guilty is the quickest way to be released. In short, the system does not allow children to defend themselves.

And after all that Israel stages a semblance of trial, in which an arab child is convicted for having signed a confession in Hebrew, a language he does not even know.

Small Steel Blog launches The Elder Brother Campaign. Because these children are our children as well as each child is a responsibility of all of us.