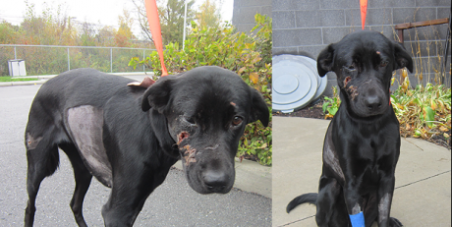 JUSTICE FOR BREEZY (Dog kicked and beaten with a shovel and rake, and tossed in a dumpster in Ottawa, Ontario, Canada)

By continuing you agree to receive Avaaz emails. Our Privacy Policy will protect your data and explains how it can be used. You can unsubscribe at any time. If you are under 13 years of age in the USA or under 16 in the rest of the world, please get consent from a parent or guardian before proceeding.
This petition has been created by Charlene M. and may not represent the views of the Avaaz community.
x

Sign this petition
Charlene M.
started this petition to
Crown Attorneys and the sentencing Judge in the Ontario Court of Justice, Ontario, Canada

VICTORY!!!
On June 19, 2014, Steven Helfer was sentenced to 2 years in jail for his attack on Breezy, as well as 3 years probation and a 25-year ban on owning animals. Although many say the punishment is not enough, the case is precedent-setting. The Honourable Justice Ann Alder stated that Helfer's actions were cruel, deplorable, and barbaric and needed to be denounced. Humane Societies have expressed their satisfaction at the sentence. Breezy has been adopted into a loving family. She is still healing physically and emotionally and will remain blind in her right eye. But she has a great new life and hopefully over time will forget the pain and suffering that was inflicted upon her. THANK YOU SO MUCH TO EVERYONE WHO SIGNED AND SHARED THIS PETITION FOR BREEZY!!!

In Ottawa, Ontario, Canada, on October 16, 2013, several people witnessed a man kick a dog repeatedly and then use a shovel and rake to beat her, put her into a wheelbarrow, and dump her into a dumpster, leaving her for dead. The man also threatened, with the rake, those who attempted to intervene, warning them to stay back. The 18-month-old Labrador-German Shepherd cross dog, named Breezy, suffered deep lacerations to her face and other significant traumatic injuries requiring extensive surgery. Nearly a week after she was beaten, Breezy was still considered by veterinarians to be in critical condition despite the fact she was walking and eating on her own. Breezy remained under the care of the Ottawa Humane Society until she was adopted into a new family on March 7, 2014. As of March, 2014, it is still not clear whether Breezy's right eye can be saved.

According to the Ottawa Humane Society (OHS), Breezy belonged to 24-year-old Steven Helfer, who was taken into custody after the event. Police subsequently charged Helfer with one count of “injuring or endangering animals” and one count of “wilfully causing unnecessary pain, suffering, or injury to an animal” under the Criminal Code of Canada. He was also charged with intimidation, criminal harassment, and two counts of assault with a weapon*.

Helfer faces up to 5 years in jail if Crown proceeds by way of an indictable offence, or up to 18 months in jail and/or a fine of up to $10,000 if they proceed by summary conviction.

* NOTE: Steven Helfer also pleaded guilty to two counts of assault with a weapon for threatening neighbours with the rake and to criminally harassing his mother. He was ordered to undergo a psychiatric assessment prior to sentencing, which is scheduled for June 19, 2014. This information is significant, as the National Link Coalition states that animal cruelty is a crime that is a red-flag indicator of the potential for the animal abuser to be participating in other criminality, including violence toward humans, either simultaneously or in the future. It is thus imperative that the criminal justice system deals with the crime of animal cruelty appropriately, to ensure the safety of both animals and humans.

THE PETITION:
We the undersigned respectfully request that Crown Attorneys proceed by way of an indictable offence in this case and that, IF Steven Helfer is found guilty of one or more of the charges of animal cruelty against the Labrador-German Shepherd cross dog named Breezy, Crown Attorneys recommend to the judge the maximum sentence available under the law and the honourable sentencing Judge in the Ontario Court of Justice apply the maximum sentence available for these offences.

We also request that, if Steven Helfer is found guilty, the court, in accordance with Section 447.1(1)(a) of the Criminal Code of Canada, “make an order prohibiting the accused from owning, having the custody or control of or residing in the same premises as an animal or a bird” for the rest of his lifetime.

Please sign and share this petition to Crown Attorneys and the honourable sentencing judge to get justice for Breezy.

For further information about this petition, please see the following Facebook page:
https://www.facebook.com/JusticeForCaptainPetition

LINKS TO NEWS STORIES ABOUT THIS CASE: