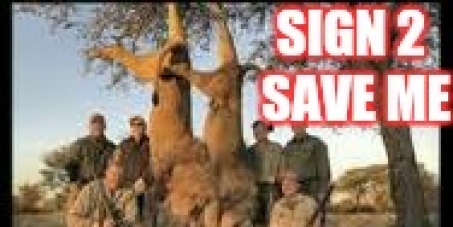 By continuing you agree to receive Avaaz emails. Our Privacy Policy will protect your data and explains how it can be used. You can unsubscribe at any time. If you are under 13 years of age in the USA or under 16 in the rest of the world, please get consent from a parent or guardian before proceeding.
This petition has been created by Turia H. and may not represent the views of the Avaaz community.
x

Ms. Norman of the United States Fish and Wildlife Service we implore you to reconsider your status of the lion from threatened and list it as endangered. The wild lion population is on the fast track to extinction. Human conflict and poachers are part of the issue but the canned lion hunting industry is a large contributing factor. There are documented cases of lions being stolen from the wild to replenish the gene pool of those in the canned hunting farms.

Another threat is the lion bone Industry. Some say canned hunting takes pressure off the wild population which is untrue. The Asian elite still prefer the wild lions due to the level of purity and the close proximity to tiger bones and there is no point hiding behind the fallacy that we are allowing the canned industry to continue as a protection to the wild when it's common knowledge that the bones of one animal alone brings in $10,000. Imagine the price of wild lions

Trophy hunters say they are contributing to the economy and feeding the poor villagers. Another fallacy. The land used to farm lions and other trophy animals was formerly used to house wool farming facilities, fields of produce, thereby contributing to the loss of many jobs. As for feeding lion meat to the poor, which trophy hunters have used to justify their activities, it's not legal to donate or sell and is not fit for human consumption. So not only are they raping the land of Africa of its natural resources, they are contributing to the possible outbreak of disease.

We are not able to control how another country governs itself but we are able to cause change within the supply and demand chain. American trophy hunters take home 60% of the lion trophies. If an endangered status and a ban on imports is put in place this will decrease the demand and force South Africa to look into more profitable sources of revenue such as eco-tourism which provides many more jobs and brings in greater revenue to a greater number of people.

If USFWS continues on its current path it will be directly contributing to the extinction of the wild lions and the despicable practice of hunting lions raised like dogs in a puppy mill.

Today: Turia H. is counting on you