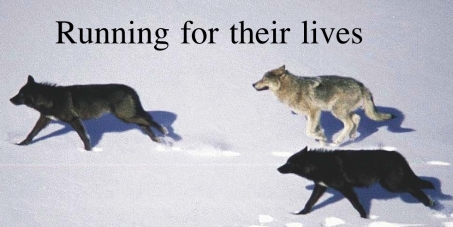 Rachel Notley, Premier of Alberta: Stop the inhumane killing of wolves in Alberta.

By continuing you agree to receive Avaaz emails. Our Privacy Policy will protect your data and explains how it can be used. You can unsubscribe at any time. If you are under 13 years of age in the USA or under 16 in the rest of the world, please get consent from a parent or guardian before proceeding.
This petition has been created by Chris G. and may not represent the views of the Avaaz community.
x

Sign this petition
Chris G.
started this petition to
Rachel Notley, Premier of Alberta
Alberta is using taxpayer dollars to fund the barbaric slaughter of hundreds of grey wolves in a scientifically flawed attempt to increase dwindling caribou populations. Aerial gunning, poisoning, and neck snaring have already killed more than a thousand wolves. All of these methods are widely recognized as causing considerable distress and agony. The Canadian Council on Animal Care (1993) forbids inhumane methods of killing animals for research purposes. Aerial gunning of wolves is considered inhumane because inaccurate shots often result in prolonged pain and suffering of dying animals. Moreover, strychnine poison baits and snares kill wildlife indiscriminately and cruelly. Nearly 1,000 non-target animals, including caribou, have been killed accidentally in just one Alberta study area. Not only are these lethal practices cruel, but studies also show they are ineffective at recovering caribou populations in the long-term. Only with immense international pressure can we convince Alberta to put an immediate stop to the killing and commit to effective caribou recovery by limiting habitat destruction and degradation caused largely by unsustainable fossil fuel extraction and industrial logging. This petition will add to the letters of opposition pouring in from all over the world.

That the ultimate cause of caribou decline is the uncontrolled destruction, fragmentation, and degradation of habitat by industrial activities is well documented. Not only are caribou directly deprived of high-quality habitat, but the associated roads, seismic lines, and packed snowmobile trails also act as highways, leading wolves straight to remote caribou herds. In some regions, these disturbed habitats support increasing numbers of moose, elk, and deer, consequently boosting wolf numbers and potential wolf predation on caribou. Governments have scapegoated wolves for too long, and controversial wolf-killing programs that cost taxpayers hundreds of thousands of dollars per year are not going to save these caribou from extinction.

"Governments and the industries most accountable for the demise of Canada’s natural environment have perversely and consistently diverted responsibility and accountability to others, including grey wolves,” said renowned large carnivore expert and Raincoast Conservation Foundation senior scientist Dr. Paul Paquet.

Until governments commit to fully protecting caribou habitat from the vested interests of oil, gas, logging, hunting and trapping, the at-risk caribou herds will continue to decline. This will happen even if thousands of additional wolves are needlessly killed for what scientists acknowledge would be several more decades. Raincoast Conservation Foundation (www.raincoast.org), Wolf Awareness (www.wolfawarenessinc.org) and Humane Society International (www.hsi.org) are calling on the Alberta government to:

1. Stop the inhumane slaughter of wolves immediately
2. Comply with the Canadian Council on Animal Care Guidelines (1993)
3. Stop the industrial development of habitat critical for caribou

Petition:
We, the undersigned, demand that the aerial killing, poisoning, and neck snaring of wolves in Alberta be stopped immediately.

Today: Chris G. is counting on you